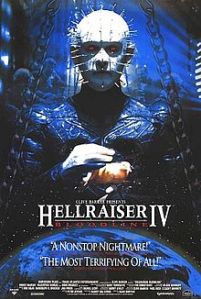 As you are introduced to a strangely shaped spaceship in the middle of outer space in the year 2127, do not be alarmed. Don’t even let that pesky roman numeral four fool you in the title. This is not Star Wars. This is Hellraiser 4: Bloodline. This movie goes in a significantly different direction than the previous three in a lot of ways. New characters, an origin/background plot, and a director who didn’t even want to be given credit for the movie. You read that right. Kevin Yagher, the director of the film who left before it was finished decided to use the Hollywood pseudonym, Alan Smithee.

Does that suggest that this movie is bad? It may or may not. Although it got mixed reviews, there are some positives. I’m a sucker for an origins episode of a show or movie, and this is one entire, long flashback. And then a flash forward. The reason Mr. Yagher left this movie is because of the conflicts with script/plot and an unnecessary push for Pinhead to appear way before it was ever

The faceoff: Paul vs Pinhead

necessary. I would tend to agree with this approach, because most of the movie fell flat for me. How was this the first movie with a theatrical release?

Let’s get down to the bare bones plot with this one. So in the year 2127, there’s this famously brilliant scientist named Paul Merchant (faint echoes of Paul Muad’ib?) who is holding up on this space station he created. Seeming to be a bad thing, a crackpot squad of mercenaries travel to the station in order to thwart his “dastardly plan”. Merchant (Bruce Ramsay) is easily apprehended, and he tells a squad mate, Rimmer (Christine Harnos) his entire lineage sob story.

Rimmer gets told a sob story...

This is the point in the movie where things get interesting. Philip L’Merchant (still Bruce Ramsay) is a French toymaker, credited with creating the first box, the Lament Configuration. In creating it for a French nobleman obsessed with dark magic, Duc de L’Isle (Mickey Cottrell) unleashes Hell. Literally. In the form of a demon named Angelique (Valentina Vargas), it is up to the cursed Merchant line in order to create the Elysium Configuration in order to stop Pinhead and the other demons from wreaking havoc.

And, in this way, we are given three sections of the lineage of the Merchants. There’s its origins with L’Merchant, there’s the modern day, 1980’s John

This is the...dumbest of the Cenobite creations.

Merchant, and the futuristic, about to end all this B.S. Paul Merchant. At the same time that having all the Merchants being played by one man was a strange thing, it also strangely works. Bruce Ramsay isn’t the best by any means, but, for this movie, he gets the job done. He does vary his acting personalities and gets across that he is playing three different men throughout the years. I wanna point a little interesting fact out right here. Adam Scott, co-star in such acclaimed movies as Knocked Up, Step Brothers, and Piranha 3-D, makes an appearance as Jacques, the man who betrays his master like a coward. Of course you bring Doug Bradley back as Pinhead because, come on, it wouldn’t be a Hellraiser movie otherwise.

With less grit and graphic imagery than originally intended, this movie sits solidly among the others, but more as a distant cousin than anything else. This movie suggests a fixed point ending to Pinhead and the Cenobites, unlike any other movie. These undead, Hellish beings should never be killed, and it should be up to the perpetuation of this fantastic series to do so. There has been a new one released recently, Hellraiser: Revelations in 2011, which shows the series isn’t gonna quit yet. And I’m all cool with that. So look forward to a review of Hellraiser 5 in the near future, I’m really looking forward to it myself. An okay 4.2 out of 10.