What is there to say about Heavy Rain that hasn’t been said by thousands of other game reviewers? This game is awesome. This game is incredible. Not as intense as most action games as you’d expect, but if you just like pressing buttons and being immersed in a cinematic experience for about 6 hours… Play. This. Game.

What should I say about the plot. First of all, the title isn’t random. It is badass as Hell though. Think about it. Heavy Rain. A lot of shady, ridiculous shizz goes down in back alleys and seedy motels when it rains hard. Just look at Identity. Great movie, very similar in feel and tone to this game. Watch them in conjunction, I don’t care. Or watch Se7en, there’s no end to the parallels between thriller movies in crummy cities and this game. This game epitomizes that and makes it 6 hours (or more) long.

There are four characters you play as in this game. Gotta say right off the bat that two of them really aren’t that strong. Ethan Mars is a Dad. Enough said. His son is killed in an unfortunate car accident and his other son is kidnapped by a

certain “origami killer”. (In this game it’s pronounced Ori-gamee for no reason.) You must be a true dad and save your son at all costs. You also play as Scott Shelby. He’s a P.I., out looking for the kids being kidnapped by the Origami Killer. Fat and overweight, he has a good soul. And there’s Norman Jayden of the F.B.I. This guy wrecks shit. He has this crime scene investigative turn-of-the-century ARI gadget that allows him to analyze and solves crimes instantaneously on scene. There is a catch to that though. And then there’s Madison Paige. She’s a slutty reporter.

The greatest part about this game has to be the decision making. You can play this over and over again and unlock any of a number of outcomes and endings for your characters. Every individual choice you make has repercussions that flow throughout the entire game. (Make sure you kiss/don’t kiss Madison. Huge repercussions either way.) You can make your characters do classic SIMS things like… sexually take a shower or pee. Also, you can fight in a number of quick draw reaction command scenes that could potentially kill your character based on your decisions. The entire games ending is up to you. Use this power wisely. 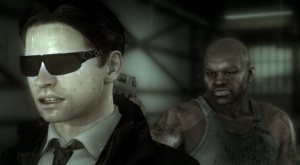 Norman Jayden. Will kick your ass.

Not to forget when it comes to this game that the graphics are out of this world… for February 2010. Since this game isn’t that old, it’s going to hold up for some time to even the biggest neurotic game design critic. Hands and the occasional motion are a bit skewed, but it doesn’t change the amazing camera angles that are employed to make this feel as if you’re watching a movie. Despite it being a one player game, invite the friends over, but don’t tell them it’s not a movie. Have someone hide with a wireless controller and have them sit there for every long hour of the game. It will fly by. And they will love it.

The game play doesn’t change much per difficulty, so its pretty accessible to

whomever wants to play it. What’s great is the interactions with the controller. You can utilize the motion of the controller in order to throttle, punch, and get out of tight holds. Even balancing the controller can result in an action in the game. What wonderful technology Sony has created. A Wii motion combined with a Playstation/Xbox controller style. What will they think of next? 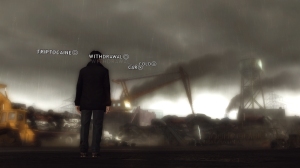 What decision will you make?

So with great plot and good voice acting (almost extending into character acting with playable characters being based on real actors) this game will immerse you in a run to the finish, a game against time, life and death to its fullest extent. If you like horror/thriller movies like Saw or the Hannibal series, this game was meant for you. Enjoy and hopefully there will be a Heavy Rain 2.