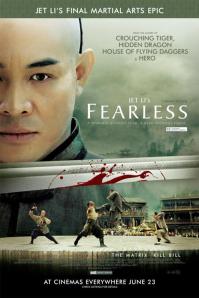 In what was meant to be Jet Li’s last Wushu epic, Jet Li busts out all the big guns for this film. Although he has made other films that feature his style of martial arts, it goes without saying that movies like The Warlords, The Forbidden Kingdom, and the Expendables (soon to be followed by a second) aren’t exactly focused around Li’s stunt action coordination or anything of the sort. I would argue that War, the movie with Jason Statham that followed this film, was a bit focused on Li’s destructive power of those around him, although the movie questions his identity. In either case, it wasn’t meant to be Jet Li’s last film, just his last display of his martial art’s competence.

In this film, based loosely on Huo Yuanija’s life as a martial artist, this movie follows Jet Li as Huo and his fights to bring back honor and national pride to a broken country. With the Western imperialism and Japanese pressure, Huo fights those foreign invaders in symbolic battles that show off the strength of pride that the Chinese people hold. If it came down to Jet Li’s acting to represent honor for China in this film, it may not hold as much meaning. I was just a bit thrown off by Jet Li’s acting in this movie. It seemed forced and comical at times, but it didn’t matter when he closed his mouth and pounced on some ass with his destructive moves. 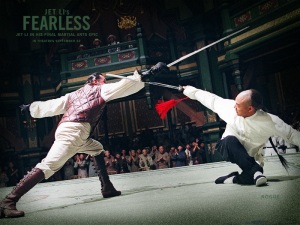 Jet Li at his finest.

The movie starts off at a martial arts display tournament in which Huo must defeat 4 competitors from 4 different countries. Using weapons and hand-to-hand combat, Huo fights back the attackers in order to defend his country. Before the fourth battle commences, a flashback to Huo’s life before takes place. For 2/3’s of the movie. Huo remembers when he was a child, being instructed by his father Huo Endi (Colin Chou) and how honorable he was. His father would take him downtown to the battles that took place in raised rings between fighters in the town. In this particular fight, Huo’s father is defeated and Huo finds his resolve to never be fearful and always to win and gain honor. 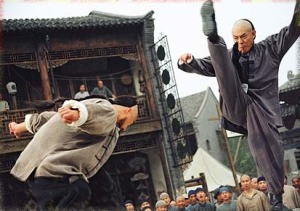 This mentality almost becomes Huo’s downfall when he won’t allow the attacking of one of his disciples to be delegated in a civil, non-violent manner. Quin Lei (Chen Zhihui) the rival martial arts master defies Huo and his newly found hubris and fights to the death versus him. With his ruthless manner, something not encouraged by his father, Huo kills Lei and retreats into the countryside to really reevaluate just what it means to participate in martial arts. (I left something out there, watch to find out.) Learning mercy and the righteous path, Huo finds himself in a position to fight for the honor of China.

This film has a lot of moving parts that really present a historical piece that is actually one of my favorite genres. Huo is a real person, and these events of his life weave a very compelling story. The fact that he fights for the honor of China at the end is a stab at those countries that would dare impose themselves on others, as the fights suggest. The tribute at the end to the dojos that are dedicated to Huo and his principles is a nice ending for the film and the events that 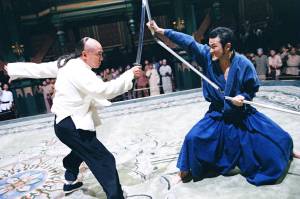 Some of my favorite weapons fighting.

The fight scenes in this movie are really what stand out though. The rings that these men fight in are very stylistically stunning. Especially the fight between Huo and the man who beat his father’s son, is ridonkulous. The poles and camera angles that effortlessly flow through the fight scene really caught me by surprise. I always knew that Jet Li was a phenomenal fighter and stunt actor, but this movie really pulled out all the stops. His penchant for stunts and choreography, especially the weapon related fights show a lot of discipline and knowledge that I admire. Not being a martial arts expert myself, I’ve seen enough martial arts and have read up enough about it to know Jet Li has got his shit in order. 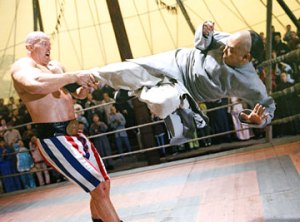 The success this film had and the amount of good reviews it is given are just, but I felt, as some others have, that the film had its down moments that kinda left it at middle of the road. Yes, it didn’t have the acting oomph that would’ve elevated it to Crouching Tiger, Hidden Dragon, but it was well above some of the straight to DVD martial arts films that’re out there. The story itself is inspiring and films like this are what make me wanna be a director. I’d equate it to a Cinderella Man type of film with the action and drama equalling each other out.

I am now psyched to hear that there are two other versions of the film, two of them depicting a more developed love/rejuvenation plot with Michelle Yeoh and a THAI BOXING SCENE. I wish they had included that in the theatrical version. My favorite form of fighting is Thai Boxing/Muay-Thai fighting. It’s one of the only forms that could take out Jet Li and I guess that’s why they were afraid to include it. I would still love to see a fight between Tony Jaa and Jet Li. Hell, Tony Jaa and anyone. Other than getting a bit of a boner over these martial arts masters, I thought this movie was very positively geared towards the Chinese community that Jet Li and director Ronny Yu were representing. It’s a great 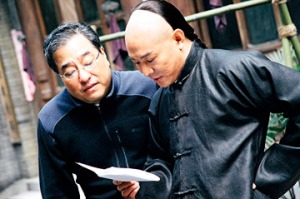 Thank you Jet Li and Ronny Yu, for making a movie China can be proud of.

message to all those action stars from non-Asian countries. Back the hell off, we have pride, and that pride will stomp all over you. That message and this film deserves a 8.1 out of 10.