The Great Dictator: A Nazi Slap to Hitler

In another vein, for a different class, I watched Charlie Chaplin’s The Great Dictator. I gotta tell ya, this is a completely different pace in comparison to the movies I usually watch. I’m all about movies after 1970, the color films, the 100 minute movies. I’m not usually up for the 2 hour black and white snore fests. But this one was at least a bit different. Hey dad, looks like I’m growing up a bit with a little taste of cultured film.

The Great Dictator is the story of a note so great dictator, Adolph Hitler. Cleverly renamed as Adenoid Hynkel, Charlie Chaplin mirrors the rise of Hitler into power and his subsequent actions in his self appointed office. Parallel to this is an image of Chaplin’s Tramp character, the 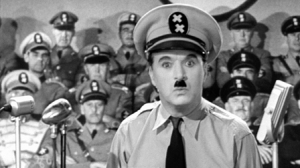 Jewish barber. After having served during World War I, the barber lost his memory and didn’t realize the war had been lost or that Hynkel had been put into power. The persecution of the Jews is underplayed in this movie (it seems as if they’re not treated that poorly), and Chaplin later apologized after finding out about the concentration camps. A depressing issue indeed.

The parts that make this movie funny is only about half of the film. There’s Chaplin’s speech as Hynkel, accurately mimicking Hitler’s wimpy return salute, and the German language and Hitler’s oratory style is dead on. The short English retorts are perfect and simply explain just what Hitler was up to. The bumbling idiots of Hynkel’s cabinet, characterized by Henry Daniell as “Garbage” and Billy Gilbert as “Herring”, strongly insinuate Himmler and

Goebbels (maybe some Goreing thrown in there). The floating globe is amazing and the slapstick is always good. I had no idea how much of a comedic genius Charlie Chaplin was.

The other half of the movie contains the plot. And I found it to be a very uninteresting one. The Jewish barber falls in love with a Jewish washing woman, and the Nazi Gestapo harass her and the barber all day long. After finding the man whose life he saved in the war, the barber befriends Schultz (Reginald Gardiner) and sets about a coup in order to kill Hynkel (if only they had…). Things go wrong, identities are mistaken, and Chaplin (the barber) gives a profound speech at the end, one I felt was directed right at Hitler. Coming out in 1940, this movie, viewed twice by Hitler, was a plea to stop the war. If only it had succeeded.

A lot of the stuff in older movies like this feel the same to me. The long credits at the beginning, the old time music, the higher pitched male voices and long shots, it’s all a constant. I have to admit I was a bit sleepy after this one. But the subject matter and slapstick are what really saved it for me. It was an

A love made in boredom?

extremely clever spoof of Hitler’s Nazi regime and spoke a lot to the things I’ve been learning about in my Holocaust class. I would recommend this one to history buffs and fans of old films, because this one is one of those classics (if you can’t get a hold of an actual copy, check out YouTube for the whole film). Not exactly my style, but I still appreciate it. 7.3 out of 10.