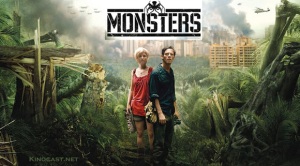 As much as I loved the premise of this movie and the idea of another Spielburg-like sci-fi alien film, it appears as if they progressive plot that should occur in this film is absent. Gareth Edwards had a great idea in posing a film in a world that has gotten used to a monster invasion, but this has been explored to a further degree in District 9. The aliens/monsters are still unknown in this film and are avoided at all costs. This creates a sense of mystery, but the end of the film leaves nothing learned. We still haven’t discovered the big twist that sets this apart from just a setup of a film. So close, and yet so far.

So the premise of this film is quite simple. Andrew Caulder (Scoot McNairy) is an investigative reporter in search of the next big story about the aliens that landed along the U.S./Mexico border. He has come the

safe route into Mexico in order to retrieve his bosses’s daughter, Samantha Wynden (Whitney Able). After some complications and a wild night in Mexico, Andrew and Samantha miss the last boat before the season of the monsters activity. For a lot more money, the two are able to illegally and dangerously obtain a ride through the river and jungles of the contaminated zone.

The actual couple, Scoot and Whitney.

From this big buildup, we expect some really awe-inspiring and weird things to go down in the jungle. The make their way down the river, Anaconda style, and then Jeep their way through the jungle. Things go South for the assisting party, but Sam and Andy make it out scratch free. They make their way to a pyramid, have a moment, and become intimate after only spending a few days together. They head into America, desolated at the point of impact around the border, and spend the rest of the film in a gas station. You get a bit of monster interaction and a disappointing Quentin Tarantino ending. And that’s it. I didn’t reveal anything you would want to avoid in a spoiler alert of a review. That is literally it.

The entire film you learn nothing and don’t grow along with the main couple. (And they are a couple, interesting to find Scoot brought along his girlfriend for the ride.) The monsters appear violent, although the tone of the film suggests they are just living in the place they’ve found. They kill, they are attacked, and it

A bit of symbolism that shows nothing is going on, ever.

seems to be a mutual hostility between the two. I did like the political undertones of the “aliens” landing on the border of the U.S. and Mexico, but that’s about all I took away from this film. Yes, visually striking at parts, but those parts are about 5 minutes of face time the monsters get on camera in a 90 minute film.

Ah, is this the map that shows where our plot went?

I was impressed at the lengths that Gareth Edwards went to film his movie on a small budget. Filming without permission, actual locations, small crew. That’s the way movie are supposed to be made. Show the world you are depicting for what it’s worth. Pull no punches, never apologize for a things. I’m in admiration of Edwards guile and ambition, and just wish this film was better and more interactive. Maybe his version of Godzilla will be better. But for this film, I’ll give it a 4.1 out of 10. 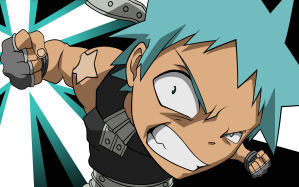