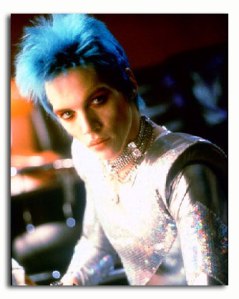 Come Fly With Me: Walliams and Lucas, At It Again

I am a huge fan of Matt Lucas and David Walliams’ hit British comedy, Little Britain. Their sketches and the characters/situations they create are groundbreaking and traditional all at once. They take the old British gag of dressing up as women and take it to the next level. They know no boundaries of race, religion, or moral. They will make you feel uncomfortable, all the while laughing at their zany antics.

And now, they bring you a new show. New characters, a new setting, but the same old tricks. It’s not necessarily overdone because we’ve seen 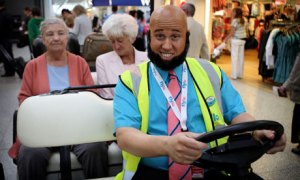 Taaj, keeping it fresh with the biatches.

the same style before, but they keep it fresh, just by being themselves. This time around, Matt Lucas and David Walliams are a variety of characters, all centered around an airport. In this mockumentary, entitled Come Fly With Me, Lucas and Walliams keep their fans happy with a brand new hilarious show.

Praise to the Lord they will not sue!

And what a show it is. With talking-head interviews supplementing situational comedy throughout the airport, Lucas and Walliams play over 30 characters in a feat I haven’t seen on Television comedies before. Every character feels unique and everyone can choose their own personal favorite. With the makeup being so well done, you may not even recognize Matt Lucas some of the times if you are just a casual watcher of the show.

But there is a problem people have with the program. They say it’s racist. And yes, I can admit to laughing hysterically every time Matt Lucas plays Precious, the coffee store worker. (It’s an inside joke about the name and personality, but it comes across as funny all the same.) Or, even the

All in a day’s work for Matt Lucas.

Japanese fangirls… But that’s not the point. I think this show proves that airports, despite racist characters like Ian Foot (Walliams), the airport head of security and customs, an airport is a place of a widening array of people. Unlike America, the “true” melting pot of all nationalities, an airport such as this one does have people from all over the world flying from all other places. It is a unifying experience, known simply as “flying”. Even Lucas and Walliams recognized that themselves when Moses (Walliams) approaches a Chinese man as the airport liason, and, saying, “Sprechen Sie Deutsch?”, he surprises himself with the Chinese man responding in German. And, despite all that, they show embraces and pokes fun at the homosexual community, Matt Lucas being a proud member of that group. So how could a show that pushes all the limits not go on doing so? Come on…

How much do you love Disney World?

Despite racist allegations and shots at the show’s ego in spite of being after Little Britain’s success, I’m damn proud of Lucas and Walliams getting back out there and doing more comedy. I missed them immensely and was just looking for another show to fill the hole in my comedic heart. This show did it (with the help of Snuff Box).

So set aside your politically correct mind for 6 episodes and sit back and relax and allow yourself to giggle at the occasional profanity or stereotype. I promise, when all’s said and done, you won’t be a 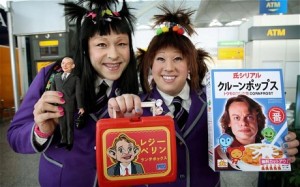 Get a load of that…

redneck. Or whatever you fear you may become. This show lightly grazes over a topic I didn’t know you could go over for 6 episodes for. Flying and airports. Hating the experience of flying itself, I felt this show handled a bunch of jokes that comedians have been pondering for years. “Why is airline food so bad…” And why is this show so good? 9.5 out of 10.