Alright, first off, death to Rotten Tomatoes. I’m not really sure where this website gets off giving this film 16% (why the hell a percent?) “approval” rating or however they go about rating all films. I’m just assuming at this point that they shit all over action films and take no account of the true purpose of an action film. Action. That’s what the damn genre is called and that’s what I expect. So this critique websites that don’t really go too hard into giving the least bit of credit where credit is due, need to re-evaluate what’s going on. Maybe I should rename my blog “Reviews from the Silver Lining,” cause there’s rarely a film I can’t take something away from and appreciate it for that fact. Even if it’s horrible, there are a lot of people whose blood, sweat, and tears went into that film. And they deserve at least a worthwhile evaluation of, I would suppose, a life’s pursuit. Come off it.

And I found a damn lot right with this movie. The title of the film coming from the Japanese art of paper doll plays, this movie created a landscape in which the actions and scenarios displayed on film could be believed. From one

The Drifter (Hartnett) and Yoshi (Gackt). A dynamic duo.

direction of town comes The Drifter (Josh Hartnett). The other, a Samurai named Yoshi (not Nintendo related) without a sword or honor. In a world without guns, an all out brawler and sword expert come together to absolutely Tech Deck wreck a bunch of foolish thugs.

And why do they come to this town? They come to kill the Woodcutter, Nicola (Ron Pearlman). With a debt to repay and a talisman to recover, these two must join forces in order to conquer the evil

that has taken of the East. Without a specific location, this movie took on a whole new post-apocalyptic world in which, finally, sissy-ass guns have been laid to rest. The only movies I ever want to see guns in are The Matrix and Equilibrium. Enough said. Upon this landscape of raised paper houses, anything and all can happen when you can swing like a prizefighter and run house like Kurosawa.

For a half arthouse, half action packed punch, this movie brings out the action side with a lot of action stars. From Pearl Harbor, Black Hawk Down, and

I gotta say Hartnett worked shit in this one.

Lucky Number Slevin comes Josh Hartnett. His no talk, just rape (in whatever sick and twisted good way you can talk about utter destruction) this guy lays waste to those who would doubt him. Next up, and most notably, is Gackt, Japanese singing sensation and all around beautiful face. Among other talents, Gackt can speak English far more fluently and clearly than say, Ken Wantanabe in Inception (what happened between Last Samurai and that?). His sword skills are a bit jumpy at parts, but who wouldn’t expect that from a pretty boy singing prodigy? He is in his late 30’s… 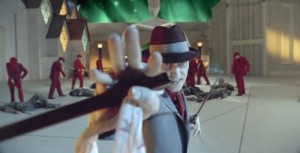 Kevin McKidd as Assassin #2. What a character.

Throw in Ron Pearlman, face of Hellboy and a handful of other well known action films. There could have never been another soul alive who could have played Hellboy half as well as he did. And he wasn’t the worst at Nicola either. Give another little toss to Woody Harrelson of Natural Born Killers and more recently Zombieland. Not a big fan, but he did his part as The Bartender. He just never really stands out to me… Demi Moore for the old woman looks, and here’s the surprise. Kevin McKidd. This Scottish bastard had a cocky, yet strange way about him in this film that I found almost endearing. In quite a few period pieces and my favorite, Hannibal Rising, this is the first movie I think… (other than Trainspotting) that I knew this guy was from Scotland. A little bravo your way, McKidd.

Lovin' that background layout right there.

So we got the cast, the setting, and the situation. It’s all coming together. And what ties it up in a neat little bow? It for sure wasn’t the 2 hours this movie was allotted. It felt more like 3… It was the special effects. provided by Snoot FX, the locations and shooting styles felt action-y (?) and the fluidity of the fight scenes and the transitions (especially Hartnett’s fight scene in breaking out Yoshi from prison) was just top notch. It just gave such an interesting and non-retarded Sin City feel to it that I was hooked.

As Dennis Harvey of Varietysaid of the film about its fake flower feel, all color and no substance/life, I’d have to say he missed the point of the film. He was definitely batting from the ballpark of critical art film acclaim, when he should have been coming from what the essence of a Samurai/Western would be. Include the feeling of a theatrical Japanese paper doll show, and you have Bunraku. Not something tacky, but a whole new way to tell a story that I truly appreciate. That was its best part. A solid 7.6 out of 10.

Could it get better?