Prince of Persia: The Sands of Time

I know it’s been a while since I’ve posted, but I think it’s important to come back with a bang. More accurately, a Gyllenhaal. In one of the best homages to a video game, this film takes the concept of the Prince of Persia series and takes another element everyone loves. Parkour. Combine a gameplay feel and straight ahead roller-coaster plot and you have yourself the next best thing to The Pirates of the Caribbean. Never mind the

lackluster acting and portrayal of a country/nationality that doesn’t exist, Jerry Bruckheimer’s name is on this one. And if he did POTC, how could this be bad?

You may sense some sarcasm in the way I wrote that last paragraph. But, in actuality, I didn’t mind Prince of Persia. I had watched my girlfriend play a bit of the games (specifically Sands of Time) and I got a precursor to Assassin’s Creed that was a bit too much of a coincidence. Loving that idea and the inspiration that I’m sure AC drew from Prince of Persia, I was more than happy to sit down and watch the film. And what I got was exactly what I thought I was going to get. An adrenaline ride with pretty graphics and average characters. Think… The Mummy meets Indiana Jones, or something. 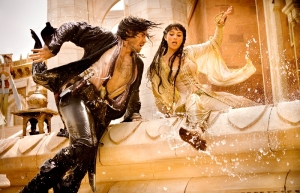 Get a load of that chest…

I think that’s what people need to realize when it comes to video game movies or action movies in general. What you expect is what you get. If you think this is gonna be an entertaining movie about a great video game, then you will get that. If you’re thinking Oscar worthy action thriller, you will be sorely disappointed. Please, critics out there, stop classifying all movies in the amazingly stellar films category. It ruins it for all of us with your snarky and harsh reviews, thus making everyone feel they should believe what one person’s opinion says in print. That’s B.S.

So, that straight ahead plot I was talking about. Jake Gyllenhaal plays Dastan, a made up name for the main character of the Prince of Persia series (he is the Prince after all). You wouldn’t be surprised how many times they use the title of the movie in the actual movie. Anyways, Dastan is a street rat (not far off from Aladdin) who is

taken into the care of the King (Ronald Pickup) and treated as his son after an act of courage. After years of success and conquest, Dastan and his brothers, Tus (Richard Coyle) and Garsiv (Toby Kebbell) have come again to another city, the city of Alamut, in order to conquer it on what seem legit reasons. Oh, but the plot thickens.

Yeah, Arterton, you should be off camera for this shot…

After capturing the priestess Tahmina (Gemma Arterton) and promising her to Tus, the King and his subjects celebrate a misinformed victory. The King is poisoned by the framed Dastan while the King’s brother Nizam (Ben Kingsley) stares on in horror. He flees with Tahmina and a dagger he won, only to find it has the powers to control time. With such a great power, well, you know the rest. It is up to the banished Prince of Persia to save the ones he loves and stop the destruction of the world. The typical main points in any action film.

Of course, there were the obvious faults in the film. Jake Gyllenhaal is putting on a strange English accent and portraying a tanner race that no longer exists. Everyone speaks in either an English accent or some strange Middle Eastern tinged accent. The one actress in this film is annoying and godawful. What is there to say for action movies like this when one 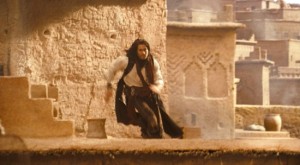 Parkour to the extreme!

that is a decent video game remake has the worst female presence? Either get a better actress, or realize that most action movie females are there for sex appeal. At least there’s Lara Croft (but those shorts/tight fitting tanktop aren’t really helping…).

But I would say I was surprised that this film didn’t go for the cheesy lines as often or the special effects taking over the action. If I didn’t know better, I’d say it looked like Jake Gyllenhaal did all his own stunts. The parkour was entertaining and the sword fights are what you would expect from a Disney film. If you kick or punch someone, they’re down for the rest of the film. I had just as much fun watching the film as I did joking about it. Bruckheimer must be doing something right to keep my attention for more than 2 hours like he did… 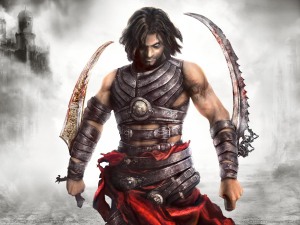 Homage to a dastardly hero.

It was nice to see Tony Kebbell again, although his character was just a gruff and always yelling side character to the main plot. And I don’t know how/why Ben Kingsley does it, but he gets roped into these average films when he’s been Ghandi for crying out loud. Bloodrayne, The Love Guru, and The Last Legion? How does he do it? But seriously, get rid of that female actress. She added nothing to the film, and I didn’t mind the ending they had before the last 20 minutes. Get some of that, Arterton.

Overall, I’m sure, this film isn’t the greatest. It is entertaining though. For those of us out there who find Jake Gyllenhaal to be a hunk, traversing over Agrabah’s rooftops and allowing his flowing mane to pierce the skies, this film was no probelm-o. There’s nothing wrong

Give him a lick, he tastes just like sexy.

with mindlessly being entertained, as long as you are aware that it’s all in good fun. That’s what this movie was. Good fun. For Alfred Molina to show up again after the supposed “disgrace” of The Sorcerer’s Apprentice (same year), it takes guts. And I’m sure they all had fun doing it regardless. Gotta say, a lot of those costumes looked ballin’. 6.3 out of 10.