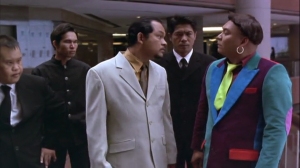 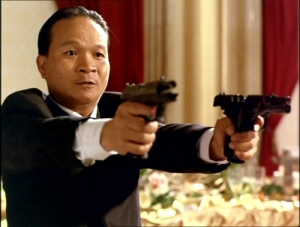 The Protector: Tony Jaa Destroys All

What more is there to say than The Protector is the best of all of Tony Jaa’s films? I’ve watched them all. I’ve seen them all. Time and time again, this is the best of the best. Tony Jaa performs at his finest in this film, in every scene. This is one nonstop action/display of skills that you cannot miss.

The Protector is the story of the ancient Muay-Thai fighters who raised and protected the elephants that would one day serve as the steeds of the nobles. The protectors raised the elephants to have strong legs and never fall, and in this way strengthened themselves. This practice extends even into modern day as a discipline among the protectors and elephants alike. And this premise makes for one amazing film.

Kham (Tony Jaa) is the son of a elephant protector who is raising a family of elephants to be viewed by the king for his own personal use. As Kham grows,

the elephants have a child, Kohrn, and that elephant grows with Kham. It is then that one day the “king” wishes to see the elephants that Kham’s father has raised. The king’s inspectors turn out to be working for an Asian crime syndicate located in Australia, and they kill and kidnap Korhn and his father. Thus begins Tony Jaa’s journey of revenge on every single member of the Australian/Asian gang. And not a single member is left without at least a broken arm.

This movie, for lack of a better word, is epic. In its scope, in its stylistic vision, in its stunts and fluidity, everything. Tony Jaa pushes himself to the limit in all of his moves and stunts. Which needs to be reiterated. Tony Jaa

does all of his own stunts. No wires, no CGI, no stuntmen. Nothing. This film is pure Tony Jaa. At no point in this film do I ever think, “That wasn’t really that impressive.” Everything that Tony Jaa does makes my heart stop. It is literally insane the amount of things that Tony Jaa can perform in the way of stunts and acrobatics with his body that could lethally kill someone or otherwise. Suffice it to say that Muay-Thai boxing and the style of Muay-Thai fighting in general is severely brutal. This is what drew me to Tony Jaa’s films in the first place. Unlike most martial arts films, Tony Jaa’s are more brutal, less about the finesse (although it’s there) and more about the fluid, detrimental way and in which to take out your opponent. Let’s put it this way. A full force knee into your chest from an expert in Muay-Thai is like getting in a 30 mile an hour car crash with no seatbelt. Yeah. He screams devastation.

And people might say, hey, you just have some absurd love for Tony Jaa. You are obsessed with him. That may be true. In comparison to most other martial artists in the film industry, Tony Jaa brings something new.

Something brutal. Something eye opening. And he literally hasn’t stopped. Ever since the first Ong Bak back in 2003, Tony Jaa has given the world 8 years of solid, amazing films in the martial arts genre. And for an actor who is only really meant to do stunts, he’s not that bad of an actor in general. He’s pretty damn good at crying.

But yeah, this movie in general is a display of just how mind-blowing Tony Jaa truly is. There are about, I’d say, 4 amazing scenes throughout the film spread out by about 15 minutes each. You have the initial interrogation with boat chase, the warehouse X-games beat down, the restaurant shuffle, and the bone shattering ending. And with each one, they just get better. So it is to you Prachya Pinkaew that I tip my hat, for bringing us Tony Jaa in The Protector and Ong Bak. The world would truly be missing something if it weren’t for you. And yes, Tony Jaa, you can destroy me anytime. 10 out of 10.

Okay, so let me start off by saying Tony Jaa makes me want to poop my pants. He is insane. Amazing. The things he can do with martial arts are just unspeakably ridiculous. He is hands down the most lethal man on the face of the planet. Okay, got that out of my system. But seriously. Ever since I found The Protector at my library and took it home to watch it, my pants have never been clean. Now to the movie at hand.

Tien (Tony Jaa) is a defeated warrior in the fourteenth century who has been captured and beaten to death. It is important to note that this is the third in the trilogy, although the first takes place in modern day and has nothing to do with Ong Bak 2 or 3. Tien was trained in the mountains in the ancient martial arts, bretrayed by his clan (in Ong Bak 2) and kills the very man who taught him those arts and killed his father. Pretty standard.

What’s not standard in Ong Bak 3 is what makes this movie stand out. The things they do to Tony in this movie are ridiculous. This movie is brutal. The torture is insane. And after all that, his entire body disfigured and broken, he comes back to beat the hell out of all those who oppose him. No mercy. With every movie, Tony Jaa improves his skill and dominates more than before with breathtaking moves. It’s a sight to see. Tien learns martial arts through the art of dance, (in an all to long scene, I might add) and uses his ridiculous skills in Muay-Thai boxing to destroy everyone. Literally, run train on all his foes.

That’s not to say that the whole movie has no plot. It’s pretty much like any other martial arts movie. But, Tony Jaa one ups every single movie by what he does. No stunt doubles, no wires, no CGI, no breakaway shots. Pretty much what you see in the movie, was done by Tony Jaa himself. It’s incredible. I know it may seem that I’m in love with Tony, but I’ve been watching martial arts movies for a while, and really, to be honest, nothing compares.

Tony Jaa and Panna Rittikrai, Tony’s mentor, did an amazing job writing and directing the Ong Bak series. Petchtai Wongkamlao is always funny as the bumbling partner that seems to always appear in all of Tony Jaa’s films, the cinematics and scenery of the shots in Ong Bak 3 are unrivaled, and the fight scenes will baffle you into disbelief. This movie, although not as good as Ong Bak 3, is still definitely worth the watch. It ends the series well and keeps me wanting more. Watch out rest of the world, Thailand has an ace in the hole. 10 OUT OF 10.