In this game of twisted returns to Wonderland, American McGee’s Alice returns with a vengeance. Featured on Windows, PS3, and Xbox 360, this game may leave you feeling a bit queasy and reeling. I haven’ played the original before, but this game got me pumped up enough for it. And you can buy the first one and play it on your game system via PS3 online or Xbox Live! All is wonderful in Wonderland…

This game takes place after the events of the first. The Red Queen is defeated and Alice feels she can return to a sense of normality. Or so she thought… Blaming

Now that’s what I wanna see (I loved her different dresses).

herself for the death of her family and sister Elizabeth in the house fire, Alice is sent to an insane asylum. After fighting back against her demons, she’s released, only to find herself slipping in and out of Wonderland. 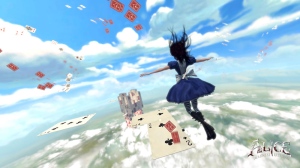 Flying fanciful free… to your death.

But this isn’t the Wonderland I know and love. This Wonderland is deranged. There are dolls roaming everywhere, black liquid acid, everyone has been deformed and crippled! Steampunk has taken over! Alice must find what is going on and stop the Infernal Train that is haunting her dreams as well as her waking life. To save Wonderland, she must save herself… and vice versa.

This game had me off me tits for most of it. I had little semblances of what was real and where I was in space and time. The characters were familiar and yet bastardized at the same time. Up was down, down was left, right was wrong, and all that old shite. (You see the English mannerisms coming in, don’t you?) Alice has become snarky and meaner in her teen years, and it all goes to show that Alice had to grow up sometime. (She still loves her stuffed rabbit though…) 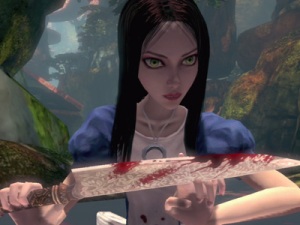 Oh, all the tools at your disposal…

The gameplay… was average. You jump and glide from platform to platform, hoping to don’t burst into butterflies, with that horrid far-off scream. You battle enemies, some easy, some impossible without the Hysteria feature that kicks in at low health. Whatever anyone says, the Infernal Ruin (the train mud dumps) are nearly impossible to beat, even on normal. I can’t imagine Nightmare mode… Most of the time you know the ways to get around, and every once in a while there’s an alternate route to take (thus, replay value). But for those really stressful times that come up in the game, I don’t really feel like going back and replaying stress. It’s not good for you, you know?

Off with her silly little head…

I think the game designers need to make Alice 3, and really vamp up the graphics. For an Xbox 360 game that was 10 years coming, it was rather lackluster. Alice’s hair is flying all over the place (actually cool) but glitches that weren’t even meant to be in Wonderland abounded frequently. If I have to play that game again and constantly fall into oblivion because there’s a glitch, I may become mad myself.

The voice acting was fine but not a lot of work was put into the cutscenes. You find out all this information in a right hurry, and it doesn’t seem to come to you where you can add up the dots. The picture cutout scenes were quite cool, but the in between mini games with the Japanese 2-D jumping and the doll’s head pinball, that has to go. 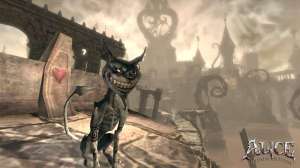 Get some of that sick depravity.

Overall, I loved the feel of this game. It was creepy, unsettling, and really focused in on my fear of dolls. Nothing feels childlike in this game and you feel that every second is your last with constant death and restarting. To analyze madness in such a way with the characters and the feeling of 19th century London, Alice Liddell really has things stacked against her. To question what is sane and insane was cool, the gameplay left something to be desired (got a bit repetitive towards the end), but, for an Alice in Wonderland fanatic, this game is just what I ordered. I own different copies of the story, different artwork, I’ve seen a dozen films, and this game combines my love of Alice and the gang with horror. What could be better? (Maybe better gameplay…) A solid 6.1 out of 10.