Face: How Clay Can Be Evil

I always thought the idea of facial reconstruction was used for recreating the faces of cavemen and our ancestors. In this movie, the skulls and recreated muscles in clay are used to identify murder victims who have been destroyed beyond recognition. A useful idea I may add (and actually done). But who knew that recreating somebody’s face could awaken an evil demon of the victim. And much more.

With two seemingly parallel story lines intertwining this film into one thread, Face is a horror movie about very specific diseases and using clay to remake a face. The star of

A bit of the fright?

the film, Lee Hyeon-min (Hyeon-jun Shin), is a face recreator who works for the police to catch whoever is murdering people past the point of recognition. Running along this is the fact that Hyeon-min’s daughter is in the hospital for a heart transplant from a very specific donor. Only able to accept Beta donors with similar to identical organs, this movies draws black market organ collecting with a facial recreation expert. When a fellow face creator named Jeong Seon-yeong (Yuh-ah Song) gets involved, things get creepy and horrific. 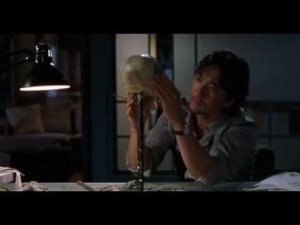 I’ll make this face to look like me. The Penguin. Muhahaha.

I was thoroughly confused at parts of this movie. Nobody was really given a name and the main actor looked like The Penguin from Batman. By the end, when everything is coming together, you feel you missed some part because the haunting ghost has something to do with something else, and it just all doesn’t make sense. There were some plot holes in this film when it came to the payoff twist.

As far as fright, this film delivered on a distant cousin with the American version of The Grudge. Now that movie is the only Asian horror film whose remake scared me more than the original. The long black hair and pale face with red eyes was reused in this one and was accompanied by some sort of scratching noise or something. But it is kinda sad when you can call every time and how they’re going to

deliver a jumpy scene. Through the mirror? Girl looks out the window? Eye in the box? Yep. It lacked a little bit of “Boo.”

It’s not one of those remarkable films you see that are made by Asian directors (this one was Korean) that has more than just fright, it has substance. This one fell short on script and delivery. For me I can never tell how good the foreign actors are, but you could kinda tell in this one. The whole film was pretty much lackluster. It took uninteresting scientific ideas and made them mix somehow. Oh well, better luck next time, Sang-gon Yoo. 4.5 out of 10.