Harsh Times: Get Some Christian Bale

In one of my favorite Christian Bale films, Bale plays a hardened soldier newly returned to South Central Los Angeles. With new promising jobs for himself on the horizon, Jim Davis (Bale) has his feet in two camps. In one, Davis is a well-to-do yet slightly skewed veteran soldier that wants to bring his loving Mexican girlfriend to the U.S. and marry her. In the other, Davis has returned to his old haunts around the streets of L.A., drinking and living the life of a hoodrat. Cruising around with his friend Mike Alonzo (Freddy Rodriguez), attempting to right their lives but always falling short.

Jim Davis, although its not explicitly stated, suffers from Post-traumatic Stress Disorder. After serving over in the Middle East, Davis suffers from bouts of extreme anger and unquenchable violence. This get him in some trouble throughout the film. In a manner of speaking, Davis becomes his own undoing, turning into a destructive time bomb ready to explode at any moment, hurting those he cares about. As an outsider viewing this, Alonzo (Rodriguez) is a spectator to the bomb

Two thugs, cruisin’ to get their. Rodriguez is creepin’ a bit hard on Bale though…

show. Both serve as peer pressure for the other, although, in the end, Davis seems to want to remain in his in between life much longer than Alonzo does.

The film starts with a bit of iffy war footage of Christian Bale running around in trenches, letting his gun go at will and laying waste to the terrorists. This is juxtaposed to the waking fear that he feels when he wakes up in the squalor of his girlfriend’s poverty in Mexico. Marta (Tammy Trull) is a wonderfully devoted character who is only a product of the environment around her. She makes the best of what she has and loves Davis dearly. Jim loves her too, and surprisingly never cheats on her. In this movie, Spanish is the language of love, spoken competently by Bale in this film, as if he picked it up after falling in love with Marta. The language barriers and connections in this film between the white and Latino characters is one I applaud in its representation in the film. 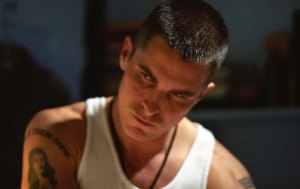 The hardened stare of a killer.

I was also impressed with Freddy Rodriguez’s performance in this film as well. Not seeing him in much other than the Grindhouse films and Six Feet Under. His voice is more recognizable than his acting, which isn’t necessarily a bad thing, because he ran his mouth in this film. Sylvia, played by Eva Longoria, was just thoroughly average in this film, as she usually is. (I did surprisingly like her in Over My Dead Body… if that’s what it’s called). Terry Crews, star of The Longest Yard and The Expendables, made a surprise appearance as a semi-believable street thug, providing some of the only comedy in the film. And last but not least, J.K. Simmons made an appearance as a Homeland Security agent looking to hire Davis. He’s always believable as authority figures in his films.

In this film comes a lot of the breakdown of what happens to someone who suffers through war. It may not appear during their service as in this film, but it may occur anytime after, triggered by any number of things. For Davis, I felt it was his return to a society that was just as cruel as the conditions he felt in

war times that did it for him. He came back to more of what he knew, and treated it like the warring sands of the Middle East. And what impressed me more with David Ayer’s writing and directing, is that he based these characters on real people from his experience in South L.A. This brought a new level to Christian Bale’s acting and the way in which his character was formulated.

Bale and Rodriguez getting the direction they need from Ayers.

Let me say again how impressed I was with Christian Bale’s acting in this film. As one of my favorite films of his, Christian Bale does nothing less than attempt and succeed at an American accent. Although I felt that the lingo used in this film was a bit over the top, when it was used, it was more than likely appropriate. With some tricks of the trade thrown in there and some real mean streets shizz, it wasn’t a stretch to believe the events of the film. But it just goes to show that the corruption of the streets can easily lead to a tragedy. And the way that Christian Bale portrays that breakdown of a character, up to the tears and fear, its a commendable performance. Not to mention how frightening Christian Bale becomes when he’s serious. I wouldn’t wanna deal with him in a dark alley.

So with his performance, some true to the streets gang banging, and the whites vs. the latinos really

Jim Davis, rollin’ hard to get his.

adds a lot to a well written story. The psychological thriller elements of the film are well delivered and I can connect things I’ve witnessed in my life to the events onscreen. On a touchy subject like the recent tours of duty over in Iraq and Afghanistan, this movie touches just the right spots with aplomb. I’ll give this one, as should be expected, a decent 84. out of 10.