Pirates of the Caribbean: On Decent Tides 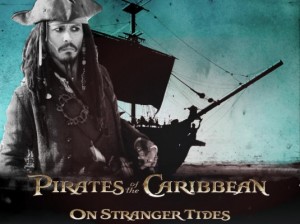 So I thought I’d give the last of the Pirates movies a go and I found I wasn’t disappointed. Despite a staggered cast without Orlando Bloom and Keira Knightly, this movie still finds a way to deliver. (I guess they really weren’t that much of a loss. But really, what have they been doing lately?) Johnny Depp has taken up the sword and three-cornered hat again as Jack Sparrow and he doesn’t disappoint. Pirates of the Caribbean: On Stranger Tides picks up with Sparrow’s last excursion on the high seas in pursuit of the Fountain of Youth. And despite the years, this movie is just as good. (Don’t bother with the 3-D.) 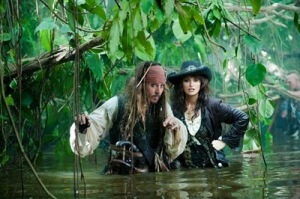 Cruz and Depp. Match made in Heaven?

stop. But Jack has a plan. He’s back in London for one reason. To discover who’s impersonating him and why. And he does find that out. It’s Angelica, his former love. (Jack Sparrow has many former loves, but I guess that’s beside the point.) He really did love Angelica (Penelope Cruz) and this fact ropes him into her wild adventure. And her wild adventure comes with baggage. Major baggage. Angelica has acquired the help of Blackbeard (Ian McShane), the new Barbosa and ruthless pirate of the sea. Their goal is the Fountain of Youth, and its Blackbeard/Angelica vs the English (plus Barbosa) vs the Spanish Armada vs the one and only Captain Jack Sparrow. 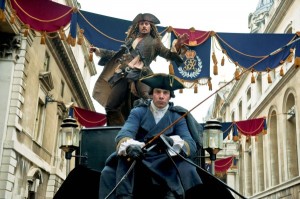 And what a thrill ride it is. The chases, the mermaids, the magical island (Florida, I think) and the start of an actual myth that has kept the world searching. It all adds up to an amazing little roller-coaster of action and adventure. I’m sure it’s fine in 3-D, again, it’s just as good in 2-D, and the special effects really shows it. (I expected something with zombies, but I was disappointed.) The mermaid scene is quite cool and all the stunts look top notch. And the acting is what you expect from a Pirates film.

Johnny Depp is classic Jack Sparrow. Penelope Cruz is kind of annoying (I don’t picture a hispanic female pirate would have anything to do with the Pirates movies) but I guess she fulfills her purpose. Geoffrey Rush was amazing as Barbosa, the whole reason I love Pirates of the Caribbean. His witty, 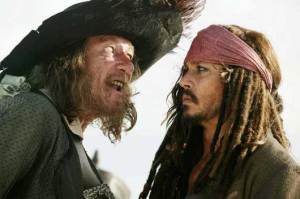 devil-may-care attitude and  amazing personality really brings a whole other level to the rapport of the films. Ian McShane (a respectable actor) really leaves something to be desired. I felt as if he was doing his own imitation of Barbosa, and it just wasn’t as good. Sam Claflin plays a small part as some sort of pastor who falls in love with a mermaid. A comment on religion vs magical realism? You tell me. And Richard Griffiths, good old Uncle Vernon of HP, plays a small part as King George.

Rob Marshall (Director of Nine and Chicago… what?) Delivers a good addition to the Pirates franchise. The story is sound and gives another reason for everyone to go to Disney World and have a go on the Pirates of the Caribbean ride. And it sure is worth it. If the movies are any attest to the ride and the entity that is Pirates of the Caribbean, you should check this movie out (DVD or in theaters, doesn’t matter.), it’s worth viewing. 7.6 out of 10.