Wow, it’s been far too long since my last post! Been busy, but now coming back more furious than ever. (Not mad.) So first things first. Let’s start with the last of the Harry Potters. Didn’t catch the midnight showing, but watched the first part the day before and the second part only 3 days after its release (matinee in the middle of the day? Yes thanks.). I gotta say, I was semi-impressed. In totality, these movies do justice to the end of an era. But separately, it just seems as if they need to be combined. (Total of 4 hours of film in a row? It’ll just be Gods and Generals with magic.) It’s the final battle, and Harry has to take on the wizard of wizards, Voldemort. If you haven’t read the books, then I won’t spoil anything for you. But here it is.

Good old Harry Potter (Daniel Radcliffe) has to find the Horcruxes. These are items in which Voldemort

Harry, Ron, and Hermione vs...

stored his soul through the act of committing unspeakable evils (a.k.a. killing people). With one down (Dumbledore’s sacrificed hand to the “ring”) and another out there in the kid’s peripherals (a locket), the adventure is set. The Ministry of Magic,

Gringott’s, the Malfoy’s house, and even Hogwarts, this movie goes everywhere. And as the books did, everything sums up and becomes clearer and connected. People have always had problems with the movies not lining up with the books, but come on, there’s no way all of the info and exact actions of the books can be portrayed, so some slack has to be given to Warner Bro.’s. But that’s besides the point.

The action is fantastic. No 3-D for me though, there’s really no point in any film being in 3-D. I would continue to rant about this, but the movie industry likes the money coming in from it and doesn’t care about the headaches and unrealistic way 3-D alters the films. Oh well. The magic duels were great

Just some of the movie magic from Part 2

and the carnage was really brought to a level not a lot of children’s books would go to in theaters, hence, the PG-13 rating. The effects, as usual for every movie, every year, are top notch. The locations are interesting and breathtaking. (I always picture any adventure film outside must be filmed in New Zealand since LOTR.) It feels almost as if every location were waiting for the characters to return to play their part.

These 3 have thankfully improved over the years.

The acting, thank God, has gotten better with every film. Daniel Radcliffe’s flighty and flinty acting has improved to an acceptable level, but I’m sure, in most fan’s mind’s eyes, Harry should’ve been different. (No offense, you did the best you could Daniel.) Ron (Rupert Grint) with his older age has improved and gone on to make other good films (two I would recommend would be Driving Lessons and Wild Target.). Hermione (Emma Watson), in addition to her beauty, has become a wonderful young actress (come on, I’m her age and I’ve grown up with her basically.) who I’m looking forward to seeing in other films now that the H.P.’s are over.

There’s still the supporting cast (in reality, senior acting class that really give the movies their class) that needs to be mentioned. Snape (Alan Rickman) gives a stirring performance in Part II that was tearful, heartfelt, and lovely. It completely redeems his misunderstood character over the years. Ralph Fiennes is as

Snape. You were the best.

fierce as ever as Voldemort, scary and unrelenting as he was meant to be. Helena Bonham Carter plays the deranged (yet sexy, well at least to me) Bellatrix Lestrange, Voldemort’s right hand woman and biggest fan. Jason Isaacs plays Lucius Malfoy. Although completely defeated and beaten by Voldemort and his failings, I respect Malfoy and his wife and child, Draco (Tom Felton) for their misunderstood compassion shown in the films that is taken for cowardice. Rhys Ifans plays Xenophilius Lovegood, Luna’s father, a smaller part but still important. One of my favorite characters, besides Sirius of course. 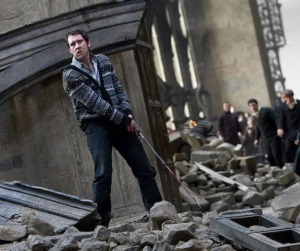 And there’s the rest of the kids. I won’t go through all the great acting that the students of Hogwarts have given over the years, but it’s spectacular. Neville becomes the hero he always could have been, Dean has gone through some freak growth spurt, Seamus still blows shizz up, and Luna is as quirky as ever. The whole Weasley family is amazingly brilliant, the Hogwarts teaching staff has all come back for the fight and Hagrid is disappointingly left out for pretty much all of the movie.

I feel a sadness in me as the books of my childhood leave me. When I turned 11, for that birthday I went to see the first movie with my friends. From the beginning I was blown away. The books I was reading were coming to life on screen. I was growing up with Harry as a constant friend. They were all my friends I would return to read and see every year. I, like everyone else my age, wished we were wizards. (Or had crushes on Emma Watson.) We wished we had the adventures of Ron, Harry, and Hermione. And now that it’s over, now that Voldemort has been beaten for good, what is there left to do? Will J.K. Rowling write more on Harry and his children’s lives? Will she be a one trick pony? I hope not. I hope generations to come see Harry Potter and become as bewitched with it as we all did. In its entirety, Harry Potter and the Deathly Hallows deserves the 10 out of 10. (Separately, Part 1 – 8.8 out of 10, and Part II – 7 out of 10) This magical empire has come to an end, but its the books that will be read and movies seen that will live on forever. In all those Muggles who believe in magic.

Will it continue? What is the future of Harry Potter?