What is there to say about Heavy Rain that hasn’t been said by thousands of other game reviewers? This game is awesome. This game is incredible. Not as intense as most action games as you’d expect, but if you just like pressing buttons and being immersed in a cinematic experience for about 6 hours… Play. This. Game.

What should I say about the plot. First of all, the title isn’t random. It is badass as Hell though. Think about it. Heavy Rain. A lot of shady, ridiculous shizz goes down in back alleys and seedy motels when it rains hard. Just look at Identity. Great movie, very similar in feel and tone to this game. Watch them in conjunction, I don’t care. Or watch Se7en, there’s no end to the parallels between thriller movies in crummy cities and this game. This game epitomizes that and makes it 6 hours (or more) long.

There are four characters you play as in this game. Gotta say right off the bat that two of them really aren’t that strong. Ethan Mars is a Dad. Enough said. His son is killed in an unfortunate car accident and his other son is kidnapped by a

certain “origami killer”. (In this game it’s pronounced Ori-gamee for no reason.) You must be a true dad and save your son at all costs. You also play as Scott Shelby. He’s a P.I., out looking for the kids being kidnapped by the Origami Killer. Fat and overweight, he has a good soul. And there’s Norman Jayden of the F.B.I. This guy wrecks shit. He has this crime scene investigative turn-of-the-century ARI gadget that allows him to analyze and solves crimes instantaneously on scene. There is a catch to that though. And then there’s Madison Paige. She’s a slutty reporter. 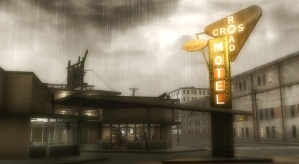 The greatest part about this game has to be the decision making. You can play this over and over again and unlock any of a number of outcomes and endings for your characters. Every individual choice you make has repercussions that flow throughout the entire game. (Make sure you kiss/don’t kiss Madison. Huge repercussions either way.) You can make your characters do classic SIMS things like… sexually take a shower or pee. Also, you can fight in a number of quick draw reaction command scenes that could potentially kill your character based on your decisions. The entire games ending is up to you. Use this power wisely.

Norman Jayden. Will kick your ass.

Not to forget when it comes to this game that the graphics are out of this world… for February 2010. Since this game isn’t that old, it’s going to hold up for some time to even the biggest neurotic game design critic. Hands and the occasional motion are a bit skewed, but it doesn’t change the amazing camera angles that are employed to make this feel as if you’re watching a movie. Despite it being a one player game, invite the friends over, but don’t tell them it’s not a movie. Have someone hide with a wireless controller and have them sit there for every long hour of the game. It will fly by. And they will love it.

The game play doesn’t change much per difficulty, so its pretty accessible to

whomever wants to play it. What’s great is the interactions with the controller. You can utilize the motion of the controller in order to throttle, punch, and get out of tight holds. Even balancing the controller can result in an action in the game. What wonderful technology Sony has created. A Wii motion combined with a Playstation/Xbox controller style. What will they think of next?

What decision will you make?

So with great plot and good voice acting (almost extending into character acting with playable characters being based on real actors) this game will immerse you in a run to the finish, a game against time, life and death to its fullest extent. If you like horror/thriller movies like Saw or the Hannibal series, this game was meant for you. Enjoy and hopefully there will be a Heavy Rain 2.

All right, I’m gonna put this out there, I like brokeNCYDE. Yes, any metal fan that knew I liked both metal and brokeNCYDE would most likely rather see my head on a pike than talk to me, but it’s the truth. I’ve been listening to them since they released their EP, “BC13” back in 2008 and I love it. Most people say that crunkcore is a stain on the face of modern music. They say it’s a travesty to the creativity of music and that it’s so offensive that they would not wish it upon their worst enemy. But let’s get one thing straight. Bands like brokeNCYDE, along with others like Dot Dot Curve:) (Another of my personal favorites, big fan of Spanky) Blood on the Dance Floor, the Millionaires, and Jeffree Star have brought rise to a kind of music that brings together two genres into one: screamo and rap. Now, don’t get me wrong, I find something inherently wrong with most of the rap scene that is active and thriving today, but bear with me. Crunkcore is a new vision. Back in middle school, I was a big fan of rap. I loved 50 Cent and G-Unit. I thought Ludacris was (and still is) fantastic. DMX was the man. And then I grew up and found a sound that was my own, that I loved. I am a diehard metal fan til the end of my days. And then I found brokeNCYDE. My roommate told me I was an idiot to listen to “shit like that.” That more than likely sparked me to investigate further. And what I found is I do love crunkcore. It’s an unholy and quite hilarious union of two types of music who would rather have nothing to do with each other. It incorporates the heavy and sick beats that I’ve come to appreciate from hip-hop and southern gangsta rap, with a few songs leaning more towards typical pop-ish dance beats. (And who is subject to finding themselves a bit of a toe-tapper to the occasional techno-trance song?) But the best thing to couple with these beats and typical rap lyrics about partying, drugs, and sex? SCREAMING. And lots of it. Sure, you have the occasional auto-tuned voice in there, but, all-in-all, it’s about the screaming, one of my favorite things about metal/screamo. I personally love playing brokeNCYDE or Dot Dot Curve for one of my unsuspecting rap-loving friends, just to see their reactions when the screaming hits them. And so, in honor of this love, I’ve decided to review brokeNCYDE’s newest album, “Will Never Die” (2010).

All I have to say is they toned back on the screaming in general, but it is by no means absent. The beats are far better in comparison to “I’m Not A Fan, but the Kids Like it.” (Although I do think the world of that album. It characterized my 2009.) Since I’m partial to the screaming, some of my favorites songs are “Always Go Hard” and “U Ain’t Crunk.” I love the ending to “Always Go Hard,” the screaming from Se7en and Phat J are fantastic. The album starts off well with “Dis Iz Rager Dude” and keeps up with the cleaner than “I’m Not a Fan…” lyrics, giving more of a wider appeal to those who wouldn’t dare let their kids touch these albums. “Shake” is a near radio worthy song with a typical rap beat that would be in any respectable dance club. As the album goes, one of the more anticipated songs that I liked from when they released it on myspace, “Teach Me how to Scream” starts well with the intro and definitely gives the message that brokeNCYDE knows they’re a crunkcore band and proud to provide a double entendre to prove that point. The synthesizer beats work well on this album for the singing parts, and the beats work well for the screaming. The album ends really strong with my favorite song, “U Ain’t Crunk,” the sick triplets coming together to provide the riff during the hook is fantastic, leaving the album with a bang and brokeNCYDE  rides out with “Ride Slow” and “Sunshine.” All in all, this is more than I expected after I so thoroughly enjoyed their EP and first full length album. In the words of Phat J: “Youse a hater/Youse a hater/Sorry things didn’t work out in your favor.” Definitely a 11 out of 10, just cause I can. So here’s a bit of brokeNCYDE’s good shiz, if you’re interested. Here’s to the abyss.