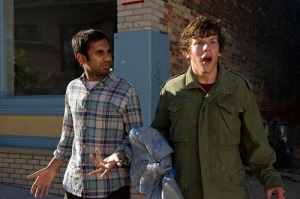 The Legend of Awesomest Maximus

So I happened to catch this National Lampoon flick on Comedy Central and tuned in and out during the film. I found some parts funny and really wanted to catch the whole, uninterrupted, uncensored movie all at once. And let me just tell you why the idea to watch this C-rated comedy even crossed my mind. Me and my friends are big fans of spoof movies. We are just as big of fans of 300 and Troy. So I had to check this movie out. Why? It combines a plot that makes fun of BOTH.

I gotta say, Orlando was quite the hilarious character in this film.

which movies, but here’s the gist. Awesomest Maximus (Will Sasso, making fun of a bumbling Leonidas from 300) is also a married member of the House of Troy. (A little Troy for you there.) With their incredible strength pitted against the strength of Greece and their King Erotic (Khary Payton, spoofing on Xerces. Little tid bit, Khary Payton does voices and in fact does the voice for Cyborg of Teen Titans.) King Erotic’s best warrior Testiclees (Ian Ziering spoofing on Achilles) in search of fame and glory, battles anyone in his way. And the Troy King’s (Rip Torn) son, Orlando (Gary Lundy spoofing on Paris, played by Orlando Bloom, ironically) is gay. 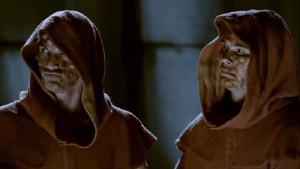 So what happens? Well, if you’ve seen Troy, then you may know. Awesomest and Orlando travel to Greece to make peace with King Erotic and, in doing so,  Orlando, although gayer than every Broadway musical ever made, steals the King’s wife Hottessa (Kristanna Loken spoofing on Helen), and they escape to Troy. With the ensuing battles and scenes of pure raunchy comedy, elements of Troy, 300, and even Gladiator are interspersed. What’s great about this is that these scenes touch on the funniest and cheesiest parts of Troy and 300 and make quite the mockery of them. I rather enjoyed it and found it to be quite the watch.

There was nothing really remarkable about the movie, because, as expected, it was a low budget

Thank you Will Sasso for a comedic spoof of Gladiator proportions.

nude/sex joke/raunchy romp film. I mean, come on, there are boat scenes with absolutely nothing but the bare minimum and blue painted backgrounds. But that’s not the point of the film. And although this movie may take many parts that were already spoofed in Meet the Spartans, they take a slightly different approach on those scenes. Without the big budget and the ability to show breasts, this movie takes sex jokes to the extreme. Include the Workaholics cast and Tony Cox, the black midget, and you have a comedy spoof worth at least one watch. So check it out. 5.2 out of 10, purely for spoof power.