We know that everyone who watches this series misses Nathan. It’s true, Robert Sheehan was the standout star of this show, really bringing down the house with his no holds barred comedy and wise  cracking. Hell, I miss him more than anything. So much so, that I didn’t watch the third series until now. My grieving was great, but it was time to figure out who gets what new powers in this series.

Amazingly enough, this series doesn’t ease old viewers in with the typical start you’d think of the old characters reuniting. This series hits you off kilter at first with Joseph Gilgun who plays Rudy, the psychologically ripped apart sociopath with two personalities. So what do you think his power is? Who would’ve guessed?

Now, Joseph Gilgun is kinda meant to replace Nathan. His character Rudy is, for lack of a better word, rude, and insensitive. He never 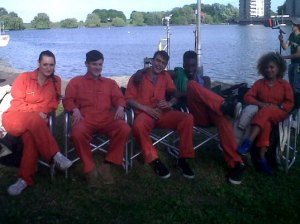 apologizes and is always looking for the next shag. Often confused and slow, this hides his sensitive side that never wants to be hurt. He is a good replacement. I have to say it. I enjoyed Gilgun just as much as I enjoyed Sheehan’s wisecracking. They’re both sexually ignorant and rude, and they both have this immaculate sense of timing. I was impressed, so give him a chance, you lot of Nathan lovers out there.

Some serious stuff going down this series…

From there we hit the ground running. Everyone has their new powers all lined up in a row, Alisha can do this, and Curtis can do that, and Simon has his own thing going on. Kelly, well, she’s just Kelly. (And she has become a Hell of a lot funnier.) Out of community service, it just so happens that Rudy stumbles upon them, befriends them, and steals a car, getting them all back into community service as accessories to the crime.

From here, the show features 8 episodes, most focusing around Simon’s destiny with the past and Alisha. Some focus around Rudy and his new spice he brings to the group, and, in a surprise twist, some focuses around Seth (Matthew McNulty) the drug dealer turned power swapper. There’s some juicy gossip there I can’t get into, but you’ll see soon enough. I also have to mention this before I forget, but, if while watching this show, you feel Rudy talks and acts like a comic version of Christian Bale (skinny of course, and lanky…) then let me know via comment. 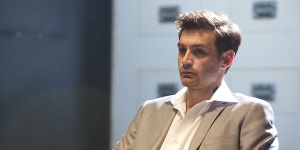 A bigger part this series?

As with every season of Misfits, I am more and more impressed with the show. It has such great characters that you grow with and hope for the best for. The comedy is spot on and there’s even more geeky references to movies and pop culture in this season! The sex is toned down and the relationships between the characters have improved. Nobody hates each other as much as they used to, and you can see the friendships growing. There’s not even that much gripe about Rudy joining the group. The ending is bittersweet and I have no idea what they’re gonna do next season.

Here’s why. Kelly (Lauren Socha) is leaving for personal reasons. Her character wasn’t properly sent off or anything so I have no idea what’s happening there. Simon (Iwan Rheon) and Alisha (Antonia Thomas) were properly sent off, and each of them made the appropriately professional and separate choice to leave the show. They had a great run and this is what you come to expect from British T.V. Curtis (Nathan Stewart-Jarrett) is staying on, which I found a surprise. This leave Rudy (Gilgun) and Curtis on the show currently. They are only seeking out another female, and two male roles. Looks like the makings of a sausage fest.

They have made strides in who they have picked for the new series though. It has been confirmed that three new

You’ll be sorely missed Lauren. I will always adore you.

characters named Jess, Finn and Alex. Jess will be played by Karla Crome will play Jess. From the pictures I’ve just looked up on Google (she hasn’t done anything I’ve seen) she should be a good, darker character addition to the show (and I don’t mean skin color, the pics online show her to be a femme fatale). Finn was confirmed as Nathan McMullen, the goofy and nice kid. They have one pic of this kid online over and over, and he looks like a sweet, curly headed kid. Guess he fits the part. These kids are so young these days…

So I hope everyone is ready for a hell of a good time with Series 3, and looking forward to Series 4. I know I am, and I’m gonna give Series 3 a good rating that it deserves. Not the same as Series 1 or 2, but something different and good all the same. 9 out of 10.