So most people may be thinking, “I need to check this guy’s man card. He’s reviewing an anime about pretty girls and boys performing ballet.” True. But I can assure you I have all the paperwork, sir. Princess Tutu, as the title suggests, may sound like one of the most girly animes on the planet. But, as I came to find, this show is wayyy more than that. This show, if you watch a few episodes, is quite good overall, with no gender barriers attached.

transform into a girl and, once a girl, she can transform into Princess Tutu, the ballerina wonder. She is given this power by the writer and omnipresent Drosselmeyer (Nutcracker, anyone?) who controls and creates the story. The story within a story, so it seems, is that of a raven who battles a prince, and in order to save the prince, a knight shatters the prince’s heart to save him and protect the town against the evil raven.

Princess Tutu is in the story, and for her part, she is meant to recover those lost shards of the prince’s heart for him to recover his true self. Duck (Princess Tutu) attends the ballet school which Prince Mytho attends and searches all over the town for his heart. Meanwhile, Fakir (the knight) does not want Tutu to recover the heart shards and tries to thwart her, thinking of the prince and what is best for him. Also introduced into the story is the dancer Rue, the beautiful and elegant ballet student who holds a love interest for Mytho. With the plot swirling around these characters, we go along for the ride in discovering exactly what this little town holds.

Besides these four, this story holds host to a great number of smaller characters that really spice up the story. At first through the anime, we’re introduced to those characters who hold heart shards, so, of course, they all have something wrong with them. There’s always a ballet student or two who are animals pretending to be humans, which no one at all finds strange. This is probably some comment on how Duck hides the fact that she’s a duck through her magical necklace. But, either way, this anime has one of the best characters you will ever meet. Mr. Cat. This ballet instructor cat-man

instructs all the classes and efficiently attempts to marry anyone who fails.

I watched the sub, but that shouldn’t deter anyone from watching the dubbed version, because most of the voices are done quite well (Guest star Vic Mignogna) but it will throw you off if you start watching one way and then another. Mytho switches from a girly voice to one quite more sexual, and Fakir goes the other way around. (Quite sad) The art of the anime is quite good, but always felt a little blurry around the edges to me. I like my anime to be sharp and flow with almost 3-D like quality (not 3-D movie crap) and to seem almost brand new. I know that’s a lot to ask from anime, but those are the ones that pop out to me (usually mecha anime, I find).

The plot, at times, is quite repetitive. Almost too repetitive. The first half of the show is all about finding Mytho’s heart shards and the second half is all about saving girls from the raven. It isn’t until the last episodes that a story is really fleshed out into its full scope. You are given little hints here and there along the way, but the basic format is the same. That includes the 17 second transformation sequence which I found out recently is pretty standard in these anime. There’s no such thing as a suggested action cut in anime. (Just made that phrase up.)

The characters really are great though and the anime rarely drags at any point. You watch as all the characters attempt to fight fate and the story that was written for them, with a great comment on the interaction of characters and author towards the end. Fan fiction (which was thrown around a lot while watching) slightly confused me, but I kind of get now once I’ve been told what it is. (For those who don’t know, fan fiction is fan created stories made using the characters already present in whatever the fan is interested in.) Usually used as a joke, I can definitely understand the appeal of using already created characters to bring about a story you envision yourself.

The characters are good, the art is quite good, and the plot really moves along. You usually find a favorite character (Mr. Cat) and jump along for the ride in all its ballet glory. Yes, I didn’t say anything in this review about ballet itself, but it is quite prominent in this anime. The characters don’t necessarily break out into dance, but they use dance to express, fight, and fix what is wrong. It’s all surprisingly accurate in form and referral, and I actually found myself not bored to tears when it came to the actual dancing. Every anime had its own theme and opening which gave it a unique flavor every time. I would definitely recommend this anime for the not faint of heart who can enjoy the alternative to most anime. 7.2 out of 10. 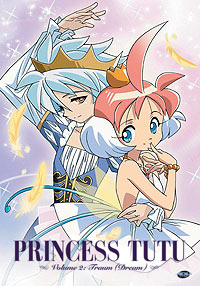