Cyberbu//y: I CAN’T GET THE CAP OFF

Are you crying from watching this horrid movie on Youtube, Emily Osment?

You may be alarmed at the use of capitalization in the heading for this review. But what you should be more alarmed about is the content of this movie. In an effort to stop the gross amount of cyberbullying that has gone on in the past decade, Cyberbu//y the movie was created.  And instead of raising my awareness and sympathy for the cause, this movie took the whole movement quite a few steps back. At least, from a cinematic perspective.

So Taylor Hillridge (Emily Osment) is a typical high schooler. Stigmatized by Hannah Montana she may be, but normal all the same. She has two rad friends, Samantha (Kay Panabaker) and Cheyenne (Meaghan Rath).  One’s a fellow Disney channel star, the other, a sexy ghost on Syfy. Word.

Then, oh my god! Taylor gets a laptop for her birthday. I find it funny they never indulge her age, but hey, Meaghan Rath is 25…  What’s the first thing you do when you get your own personal computer? Apply to a Faceobook rip-off website that asks you what color your underwear is. And also doesn’t allow you to block unwanted friends. Sounds like a plan.

Is that the Xbox symbol? What?!?

So Taylor does so and unfortunately enters the world of cyberbullying. With a simple use of “bitch”, Taylor is relentlessly assaulted by one of the ugliest popular girls I have ever seen in my life. If there’s someone who should have been relentlessly bully beaten, it was this girl. If they were going for the ugly girl you have to hate because they think they’re pretty, then they hit the nail on the head. Either way, don’t hire Nastassia Markiewicz.

Her mother had all the opportunities in the world to delete her "Cliquesters..."

How many sentences can I use to tell just how horribly inaccurate and coarse this movie was? Yes, it was a movie for ABC Family T.V., but this movie barely scratched the surface on the harshness of teenagers. All those hormones flying around and the best they could do is talk about STD’s and pregnancy? Two things that would be self-evident the second the person showed up at school. But no, I must withhold my judgment. This is a harsher time, a worse off place in this magical land of ABC wonderment. No real world problems are dealt with here. The entire movie my head was full of evil retorts that could’ve been used to right the situation. Oh, the audacity.

I don’t wanna spoil every scene of ridiculousness in this movie (anything that Jon McLaren does as Scott is worthy of this) but there are quite a few. So I’ll just show this:

Now, my idea is to take every character, in a viral video I’d love to make, and recast all the characters. In this short video, I’d have every character, every time they have trouble or become sad, and have them have to deal with a pill bottle. Because what this film has taught me is that for some uneducated suicidal teens, pill bottle caps save lives. And I will use this ridiculous scene from the movie to illustrate that. 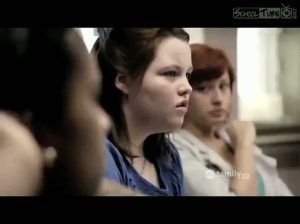 This girl wanted to get even. The other kid was a fruit.

What more is there to say about this? This movie is based on a girl who did kill herself after cyberbullying. Where’s the HBO version of this? Why doesn’t the girl succeed and they continue with the effects her death has on the family? This movie just didn’t roll on the issue as hard as it should have. I wanted some bullying that was worth dying over. Not some viral video of a girl with a bag on her head pretending to be a prostitute. Not to advocate any of this, but sometimes it takes a Holocaust proportion example to move people’s awareness. Just saying, not to be a horrid person.

A disgusting plate of horridness.

But let’s move past the issue. The acting, for the most part, was actually okay. Other than Scott. That kid needs to quit acting altogether. But yes, for the most part, the acting was accurate. But where it fell short was that this was 2011 film that struggled to keep up with a changing teen scene. It was stuck back in Myspace when people have moved on to Facebook. The pettiness has become more frightening. It’s fierce, and the lingo lacked luster. The situation seemed vague to encapsulate a teenager’s life, and the melodrama of a Lifetime movie shone through. Unfortunate and ruinous in the end. 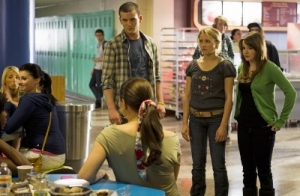 For shame, if only Haley Joel knew...