Yuji Kaido and Marlene Angel are back again in this compilation film of Blue Gender, simply called, Blue Gender: The Warrior. My roommate and I had watched the series recently (as indicated by my blog review about it) and were excited to watch the alternate ending this movie promised. Unfortunately at the time, I didn’t realize that the events of the film would be identical to those of the anime, with line by line and scene by scene reshoots (probably cut and pasted, why waste the extra effort?) of the anime placed into movie format. The only thing different is that the producers of this anime placed some silly mullet hair on Yuji that he ritualistically cuts off later in the film when he becomes “The Warrior”.

I’ll just throw in a little plot summary for those of you who haven’t seen the series. Yuji Kaido is a sleeper, someone who 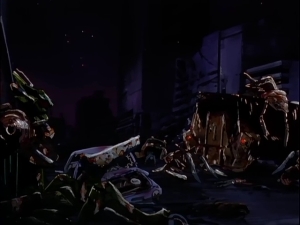 was awakened after being placed in cryogenic sleep for a disease he was being studied for. It’s a handful of decades later and Yuji has woken up to a world he doesn’t really want to be a part of. Gigantic killer bugs known as the Blue have taken over Earth, forcing humans to occupy outer space and slowly fight for dominance over the bugs. And its a losing battle so far.

Yuji and his savior, Marlene Angel must fight to get back to outer space (2nd Earth) and regroup for one last attack on those damn legged freaks. With only the slightest of twists there towards the end, its something you couldn’t miss guessing if you’ve seen the series. Just think Vietnam shell-shocked Yuji comes back to his senses. It’s a lot easier to watch than the anime if you want to save some time. But I would choose the anime over the movie, at least you get to learn the characters and see the development instead of being dropped in a point in time for 90 minutes.

Some of that famous B.G. action.

Eric Vale and Laura Bailey reprise their voice acting roles in the film and fulfill their roles just as well as they did in the anime. Two years later the anime production value hasn’t changed much, but that’s probably just the re-editing process. The plot is a bit lackluster for those who have seen the series, but entertaining nonetheless. At least the bugs get a bit more slayed in this film than in the series where they had to aim for their head-anuses, but whatevs. It’s all the same to me, and it’s just another anime-related item to check off my list. I did enjoy the series and this movie did a good job of summarizing. That’s about it. Whatever grade I gave to the series, subtract a point from that. There’s the rating. Cheers. 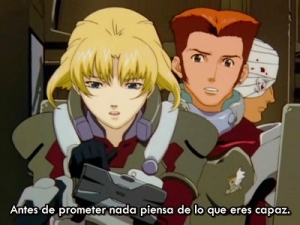