Sherlock Holmes: A Game of Shadows

Sitting down to watch this movie, I was filled with mixed opinions. I liked the first one as a whole film. Then I saw the recent BBC adaptation of Sherlock in its modern day context and found a new interest in what used to be my favorite Disney film. What am I talking about, you may ask? The Great Mouse Detective, plain and simple. This story of rats, cats, and

The one, true Sherlock Holmes.

danger is one of my favorite stories and so cleverly done I think it should rank as one of the best Disney creations of all time. But enough about that. So, when I sat down for the sequel to Guy Ritchie’s critically acclaimed Sherlock Holmes, I wasn’t expecting the world of this film. Just some entertainment.

And it didn’t really do that, that much. I was constantly befuddled by the dialogue and the quick witted humor in its attempts to be funny, leaving me unsure as to what was more important, the characters or plot. The action took over all too much of the film and left the sleuthing for the last second. You would get a 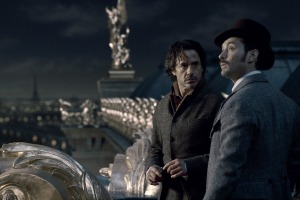 Despised friends til the end.

few of those extended deductions, but not enough of any detail that I could have noticed myself. Moriarty’s storyline and relevance in the entire showdown was rushed and wasn’t developed very well at all. If I hadn’t had seen the first film (which this was supposed to stand alone as a Sherlock film) I may not have had any idea or interest of what was going on.

And then we come to my issue with Robert Downey Jr. in this film. I thought he made a great comeback, I don’t fault him for that. But what has he done in the last five years that could be considered a serious role? Or even a character that doesn’t have a swelled head? I’m seeing Zodiac back in 2007 and that’s about it. The persona he’s created

I forgot to mention Noomi Rapace was in this one…

since the success of Iron Man is that he is Tony Stark in every role. When you see these movies, it’s not “Robert Downey Jr. as Sherlock Holmes.” It’s “Robert Downey Jr. playing a playboy, egotistical jerkoff.” If there was some range to his acting (other than a standout performance in Tropic Thunder) since his comeback, I would give him more credit. This movie was more of the same.

It wasn’t to say there weren’t things in this film I enjoyed. After watching the greatness that is Guy Ritchie’s Lock Stock, and Two Smoking Barrels, I know the elements he brings to a movie are fast and slick. Jude Law comes off as a decently done Watson with all the hesitations and reservations he’s supposed to have. Hell, that’s probably because I’m a Jude Law fan. And Stephen Fry makes a great guest star as Sherlock’s brother, Mycroft. Although I don’t think you could ever consider the two brothers, maybe that wasn’t the point. Jared Harris’ performance was unremarkable, but I gave a sigh of relief at killing off Rachel McAdams early in the story. Not a spoiler; a message from the Hollywood gods that she really wasn’t meant to be in these movies.

Can we see some more explosions please?…

rapport between two characters seen countless times before. The classic buddy comedy with a facade as a thriller action film. I don’t mind all the action and high definition, slo-mo cameras, but this movie got a little ridiculous. The fight with the Russian assassin, the explosions and all the weaponry… This loose adaptation wasn’t really that close to the Sherlock Holmes story was it? I think it would be best to allow the BBC and the British to do what they do best with their British authors. Make television versions worth watching. 5.5 out of 10. 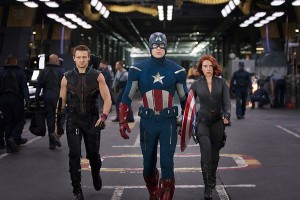