This is the one where the water works are gonna start. Taking place a few months after the first series, Clannad: After Story is about two high school sweethearts, Tomoya and Nagisa. This series goes farther than the other series by setting events as far as 7 years after the first. This allows Tomoya and Nagisa to develop into a wonderfully loving couple, scraping through their lives right after high school. All of the characters have parted ways and Tomoya has gotten himself a little apartment with a meager paying job. In a slice of life anime/drama, this focuses on the lives of those people trying to develop a life for themselves, if they can.

And, boy oh boy, you’re gonna feel your heart out for Tomoya and Nagisa. You’ll root for them and cry far more than you 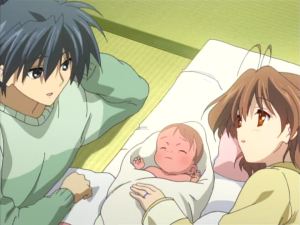 Ushio, the cutest of babies.

thought you ever could. I don’t want to reveal too much, but this one is better than the first, if you haven’t seen either, it’s time to start now. Clannad is used as a springboard for After Story and creates a sound basis for you to connect with them in later life. For the younger viewers of this anime, it may become hard at this point to relate to characters who are growing up faster than their own legs can carry them in 20+ episodes. Starting a life and making a career is realistically portrayed in this anime more than I’ve seen in most T.V. show dramas here in the states. This is refreshing to see on a lot of levels and makes it all the more real with all you’ll see over time.

I would urge those of you who read my blog and who will take my advice and watch this anime to take it slow through the anime. Yeah sure, watch the first one faster than After Story. But realize, when you get into Clannad, you may not want it to end so quickly. And you may need some time to dry your tears. That’s some real truth coming from this guy over here. I would probably give this anime a spot in my top 20 and that’s no joke there. 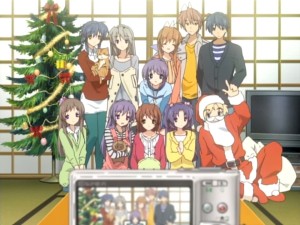 The wonderful cast, and an X-mas to remember.

There’s a baby, and some wonderful father and daughter love. Tomoya has a wonderful support network and flourishes under the pressures that are placed on him. This show is really about the triumph of the will and the importance of family and love. Because, in this anime, the dividing line between distance and connection is the finest of lines. With a wonderful Japanese voice acting cast and tears hidden around every corner, you won’t know just when to be happy or sad. Oh, and that robot and the girl? That’s all explained in After Story. So grab your tissues for this 8.7 out of 10 anime.