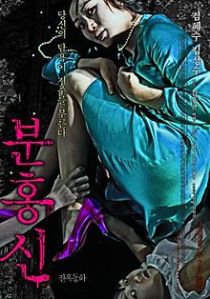 First of all, this movie should be renamed the pink shoes, because clearly (unless I’m colorblind) those shoes were pink. Not that color matters, but it came off as weird… Anyways, this was a pretty satisfactory horror film from South Korea about the old fairy tale about the crazy broad who couldn’t stop shindigging in her red pumps. In this take, a curse is placed on the shoes and you should probably make sure to watch your ankles, cause you’ll get cut off by the shin.

The story centers around Sun-jae (Kim Hye-su) a working wife who is semi-happy with her life. Her husband doles on their daughter, Tae-su (Park Yeoh-ah) and leaves very little love for his wife. One day Sun-jae comes home a little too early from stalking their daughter on her way to dance class. She finds her husband cheating on her and

That’s how the movie kicks off. Bang.

promptly leaves with Tae-su in search of a happier life (a little Pursuit of Happiness, but completely different).

In a run down apartment opposite of the subway, Sun-jae is struggling to start up her eye clinic with the help of hipster before it was called hipster contractor, In-cheol (Kim Sung-chu). With a jealous daughter who misses her father and wishes he mother was gone instead, Sun-jae takes solace in her fancy shoe collection. And then, on the subway, the perfect pair comes along… of… pink, shoes. 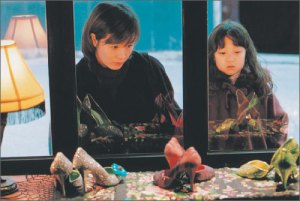 A mother and daughter, on a mission… for shoes.

Things start going wrong, horrific visions, her daughter is becoming jealous of a pair of shoes she can’t even fit into, and life is just becoming stressful in general. The perfect elements for a gory psychological thriller. Except for the ending. When a movie has 3 different endings (2 short of LOTR: ROTK) then you know you have a problem. It means the writers second guessed themselves and thought the movie needed more closure/explanation than it actually needed. And that is exactly what happened. You’ll see once you watch the movie, it’s not that bad up until a bit of a struggle with the end. It was 20 minutes too long.

But I loved the way this movie delivered the horror. A lot of it dealt with the wait and spook (jumpy scenes) but the music really dictated the tempo. There were screeching violins, nails on a chalkboard, offbeat music rhythms that really made you feel unsettled. There were some of those psychological scenes that dealt with disturbing images (i.e., one example – not a ruiner – but bird in a bloodbath sink) and a lot of tensions between 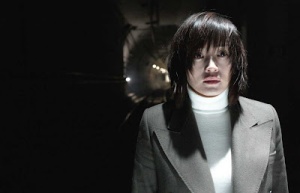 family members on some adult levels. The director and the cast/crew had a good sense of what creeps people out and what works in a classical sense, and they nailed all the major points.

This is one of those horror movies though that brings in a whole lot more than just horror. This movie tackles family relations, materialism and consumerism (with the shoes and all that, even an ad agency), a woman’s self image and outer appearance, and even feet fetishes. It was done in a very deliberately symbolic manner, and my analytical film mind actually picked up on those cues. This film ended up being a more intelligent horror movie than I thought it could be. That’s worth applauding. The acting was creepily good, special shout out to Kim Hye-su, the star, and a little girl who had to take on more than she probably bargained for, being yelled at by adults (proud of you, Park Yeoh-ah). Overall it was a very visually disturbing movie with an underlying message and too long of an ending. That all adds up to movie you should view for yourself and decide whether you like it or not. Have fun! 6.3 out of 10.

Is it over yet? Who knows…