AnoHana: A Title Too Long, An Anime Too Sad 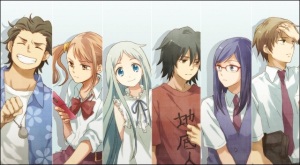 The characters of AnoHana

Okay, the title is far too long. Ano Hi Mata Hana no Namae o Bokutachi wa Mada Shiranai. Roughly translated, We Still Don’t Know the Name of the Flower We Saw that Day. (Probably actually translated) I’m no expert in the Japanese language, but… Why? Anyways, that’s besides the point. This was a phenomenal show. It was also phenomenally sad. With angst and tears in hand, this show could do no wrong. For the most part.

First recommendation about this show. Watch this by yourself. No groups 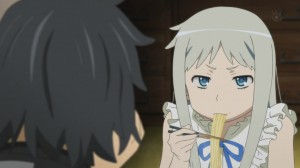 The Haunting by Menma.

allowed. Unless you and another few people really wanna attempt to cry and connect with your emotional side, then do so by yourself. It’s well worth it. Second, watch this subbed. The dubbed version is not out, may take a while, but make sure this is watched subbed. The Japanese voice actors in this show give a whole new meaning to emotional acting. And third, whatever you do, love Yukiatsu. He is the most fantastic character in this anime. Not a jerk.

The cute children of AnoHana!

To the plot. This show is about a group of friends who, when they were children, called themselves the Super Peace Busters. Slightly strange, but they were for justice and peace, not for busting it. (Or were they?) Jintan, Menma, Anaru, Yukiatsu, Tsuruko, and Poppo would hang out all the time playing Nokemon and playing in the forest in their amazingly built clubhouse for a bunch of small children. One day tragedy strikes and Menma dies. This horrific accident separates the group forever.

Until one day, Jintan starts seeing Menma and what appears to be her poltergeist apparition form. Menma is now older and has aged like all the others to their high school age. Acting  just like she did when she was younger, she now stands in stark contrast to those who lost her so many years ago. 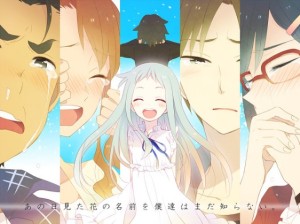 Jintan has become a shut in who no longer attends school, Anaru has become what appears to be a snobby slut, Yukiatsu and Tsuruko have become cold hearted people, and Poppo is the only one who has remained the same.

Giving Menma appearing to him as an illusion of the summer heat, Jintan continues to go about his usual life. Having lost his mother, his father and him have seemed to grow apart to a superficial level. But, slowly but surely, Jintan begins to connect with Menma and starts to remember the emotions and feelings of his childhood. With Menma not knowing what exactly is her purpose on “haunting” Jintan, Jintan must try and grant her wish and send her to Heaven. 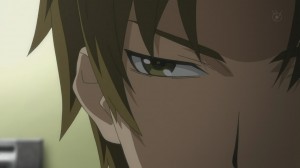 There is one thing and one thing only to say about this show. Tears. This show trys in every capacity, every episode, to make you cry. Not even the frequent intermissions of comic relief can attempt to dry your eyes of the sadness. The ending song itself functions as a key to emotionally end every episode on a revelation/sadness scene. And it is so damn effective. You become entirely attached to all the characters and want them to come to terms with Menma’s death and become friends again. And it doesn’t look possible. The alienation of growing up and high school, coupled with traumatizing death seems to leave them all hopeless. You wish the best for them and cry when things turn out all right. Just not in the way you’d think. 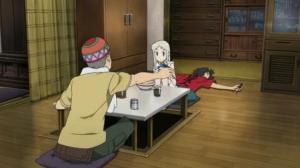 The comic relief needs to flowww.

With all the emotion and revealing scenes of twist and turns, this show just deliver and delivers. It spares not a minute of its short 11 episode run. The story is told and you’re left with a feeling of warmth beside a feeling of loss inside. And that makes it worth it. But you know what? I don’t want to cry every episode. I don’t mind spilling my man tears, but when you’re beaten over the head and told to cry, does the act of emotion and sadness really become an effective anime in the end? With the characters, I would say yes! Please for the love of God, Yukiatsu is the person I wanna be! (Wink wink) But with the plot and short period of time it has to function, give me a break every other episode. Let me dry my eyes and not feel this is kind of stupid in the heaviest melodramatic Lifetime movie way possible. Don’t try to make me cry for the sake of crying. Make me happy to shed tears for those I care about. Not unecessary tears of circumstance. 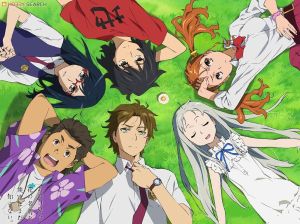