It’s all fun and games to playa hate on Ping Pong. But not to the Chinese. In a sport that originated in China (not in England, as white people claim, apparently…) Chinese people take the art of the Pong very seriously. (Balls of Fury can make fun of this one all they want. Yes, at times that movie was funny, but it is considered a sport.) But this movie 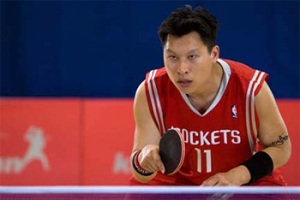 Yao Ming ballin’ it up at a Ping Pong table?

doesn’t take itself too seriously. Written by Jimmy Tsai the star of the film, combined with Jessica Yu’s directing and co-writing, comes a lighthearted and inspirational film that resets the Chinese at the top of the crop in table tennis.

At the start of the film we are introduced to C-dubs (Jimmy Tsai). He has amateur dreams of becoming an NBA basketball player, following in the famous footsteps of Yao Ming. In a mock interview with someone made to look like Ron Howard (Jonathan Oliver playing “Jon Howard), C-dubs attempts to shake the Asian stereotypes that are held over his head with his ghetto dialect, an effort in vain.

Everyone has 4th grader friends, right?

His parents, Mr. (Jim Lau) and Mrs. (Elizabeth Sung) Wang find him lazy and apathetic to the world of Ping Pong, despite owning and operating a Ping Pong equipment shop and Ping Pong lessons at the local community center. Spending all his days with his black friend, JP Money (Khary Payton) and his 4th grader friend Felix (Andrew Vo), C-dubs looks hopeless. Until the day that his older brother Michael (Roger Fan) gets into an accident with his mother, who is no longer able to host her Ping Pong lessons. It is up to C-dubs to hold down the fort and teach some Ping Pong.

As you can expect from an inspirational film like this, C-dubs is very resistant at first. He goes to the community center with no desire to 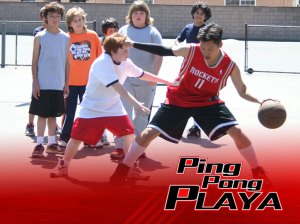 teach, despite having a talent from a young age. You know it’s getting in the way of his training for basketball, but there’s a little surprise with that… With the help of his elementary level school friends and the interest of a young and beautiful Chinese woman, Jennifer (Smith Cho). When rep is on the line, C-dubs picks it up and realizes he has been a mess his whole life. Time to step up to the paddles.

The acting was fine and there were laughs and comedy throughout. Every time there is a swear word, a basketball bounce is played over it (making it funnier than if they had sworn). It’s a movie for teens that teaches a lesson about good

sportsmanship, as well as race relations. Never judge a book by its cover (i.e. C-dubs and his bball dreams) and always have in the back of your mind that what you say may offend others. It has a nice message and doesn’t take itself too seriously. It’s semi-entertaining and may not be funny for everyone, but check it out. You might learn something. 6.4 out of 10.