In a bust out and mind expanding experience, this show kicked my ass and said, “We won’t apologize for that.” Black Lagoon, in its entirety and breadth, covers Western cowboy shootouts, Piracy and the high seas, and in-your-face American splendour violence with guns and swords. There’s nowhere this show won’t go, and all of the women have big boobs, just how male viewers want it. I don’t care that the show jumps from arc to arc like a pogo-ing hoodlum. This show delivers heaps of entertainment and doesn’t give a single damn for it. With anime like this that can take a modern action movie 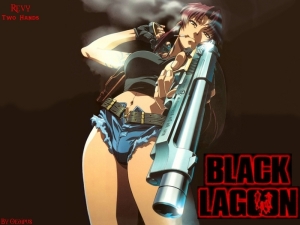 Sexy Lara Croft anyone? Thank God for you, Two Hands.

and slap it with their Desert Eagles, I get behind that anime 100%.

With this dazzling introduction, I had better “WOW” my readers, right? Well strap into your El Camino there, Wild Bill. This show will clash cars in the air, and unleash more shells than the Atlantic and Pacific Oceans combined. More carnage, more elite killings than anything I’ve seen since Christian Bale unlocked the gates of Hell in Equilibrium. And its done more graphically. As I’ve always said, what a cartoon can depict, when done maturely, can be more gruesome than any movie can depict. And you don’t need stunt actors or movie make-up special effects. This show depicts mass carnage on a monumental scale, and the main character has the mouth to back up the high content rating.

The crew of Black Lagoon (minus Benny).

Who is the main character, you may ask this post? Well, Revy (Maryke Hendrikse) provides the tomboyish, action star who looks quite similar to Lara Croft in this rollercoaster ride. Hendrikse provides an unlikeable, demeaning voice to Revy that let’s you know she wasn’t brought up by any Chinese American tycoons. She was backstreet, cat alley, chopshop material from day one. And she has the backstory and sailor’s mouth to prove it. She has a soft spot like any action star needs for the audience to connect with her, but it’s a small one at that. For her character in particular though, you may wanna check out the subbed version, her dubbed is a little bit harsh.

But be sure to check out the dub in general for everyone else! This Canadian dubbing team has worked on Gundams, Death Note, and various other anime worth checking in on. Hell, Ocean even did 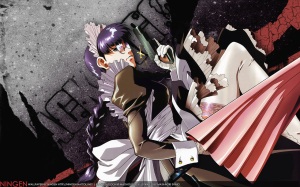 The wonderfully frightening and sexy Roberta.

the original Dragonball dubbing! For a lot of the lines and attitudes to come across as cool, I was happy to see that the dub shows that. Even a lot of the lines in the original and in the manga were written in Japanese/English, showing that it was always meant to be transferred into an English context. And with all its praise for spaghetti Westerns and American action films with its references, it was only a matter of time.

As gritty as it gets for Rock.

So, yes! The dubbed version. You have Brad Swaile as Rock, the male lead of the show. Used in contrast to the rest of the characters in the novel, Rock is dropped in to a world he would never survive in. As chronicler of this tale, Rock acts as a moral compass in this show that has no meaning or need for direction. His white collar lifestyle and good guy attitude should’ve gotten him killed at this point, but the port town of Roanapur is amused with what he has to offer. He’s determined to change things, and this is an interesting role for a main character whom you’d expect to be pissing himself 90% of the show (the other 10%, would involve the other end).

There’s Dutch (Dean Redman) and Benny (Brian Drummond), respectively, the leader and muscle of the squad with his big black attitude, and the brains behind the operations with his American ideals and his Jewishness (which I didn’t get at all in this show). Dutch is a fantastic leader and motivator for the team, staying neutral at all times so as not to jeopardize his crew and endeavors. Benny lays low like Rock does, leaving the crew to 50/50 on manpower and gun control. With the rest of the cast of Roanapur’s finest, there’s bound to be bloodshed, booze, and boobs galore. 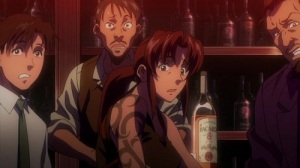 The tag says “She’s back.” Perfect.

What this show follows is an erratic plot of gigs and tradings that the Lagoon Company gets themselves into. At first, it was just Dutch, Revy, and Benny. But after a botched job that lands Rock in their laps, the Japanese get involved and that’s where the show turns into a Japanese man’s perspective on the seedy underbelly of the Southeastern area of Asia. There are heists, Nazis, shipments of drugs and guns, and fights between the clans. I don’t want to give too much away, but every clan becomes involved at some point in the show, with one of Black Lagoon’s dealings or another. There’s a great secondary cast of mercenaries who always populate Roanopur, but there’s one character you have to look out for.

That character is Roberta, the maid. This Columbian maid has come to find her charge in one of the arcs. After that, she becomes one of the most badass characters in the show. She’s calm, cool, and collected, and never leaves anything to chance. She won’t die, and there’s so much more I could be telling you that I’m leaving out. Let’s just say she’s so amazing that they made an OVA storyline about her. Get some of that Columbian underground.

One of the great secondary characters! 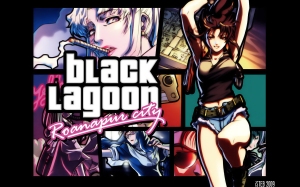 I can’t talk highly enough of this show. It has everything an adrenaline junky is looking for, and then some. Action fans of the world unite and check out this anime, especially if you have no idea what an anime is. The plot and dialogue is insightful enough for a gun toting anime, and there are some unbelievable things that will surprise you. Entertaining to the end, Black Lagoon is one of those few shows that I watched everything related to it. Even those cute and funny little omake episodes they made that’re on Youtube. Everything about this show screams badass. And it should make you scream too. So check out this pumped up gun ride on the high seas. It was never more f#$%ing cool to be a pirate. A 9.5 out of 10.