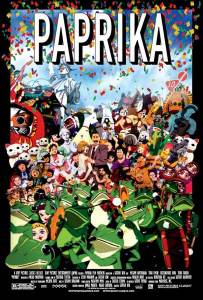 My loves in life are horror movies, metal, and science fiction. But that's not all I will be reviewing. I'm going to run the gambit on movies, music, books, and maybe a video game or two. Whatever I can get a hold of, I'm going to review, new and old. You can take my opinions if you want, but in the end, it's what you decide. END_OF_DOCUMENT_TOKEN_TO_BE_REPLACED
This entry was posted on Friday, June 3rd, 2011 at 5:48 AM and tagged with 2006, A-list, acting skills, America, Anime, Aniplex, asleep, awake, cartoon, Christopher Nolan, comedic, cute, DC MIni, dramatic, dreaming, dreams, dubbing, film, Funimation, happy ending, Inception Anime, Japanese, mind-bending, modern day, movies, Paprika, parades, positive reviews, psychologists, reality, rip-off, romance, slice of life, sound, surreality, technology, thrill of flight, versatility, vivid colors, voice actors, warped reality, Yuri Lowenthal and posted in Anime/ T.V., Movies. You can follow any responses to this entry through the RSS 2.0 feed.
« Creation: The “A Beautiful Mind” of the 1800’s
X-Men: First Class »